Carlos Vila, of Kiwi Atlántico: "We hope that sales will remain stable or even increase this year"

Spanish kiwifruit production is expected to grow by around 5%

In early November, the kiwifruit harvest started in the north and northwest of Spain; the area where Kiwi Atlántico, a pioneering company in the introduction of this fruit in the country, has its farms.

“The harvest started on the farms where the fruits had already reached the right Brix, as in the younger plantations, and it will finish at the end of November. We will start the commercial campaign between November 25 and 28, once the fruit has rested in the refrigerated chambers in order to extend its shelf life,” says Carlos Vila, manager of this Galician company, the largest kiwifruit producer in Spain and one of the most important in Europe, based in the municipality of Portarís.

"This year, the Spanish kiwifruit production is expected to increase by 5% due to the entry into production of new plantations in different provinces, such as Valencia or Catalonia, in addition to ours," says Carlos. "At the same time, other European producing countries foresee a drop in the production." 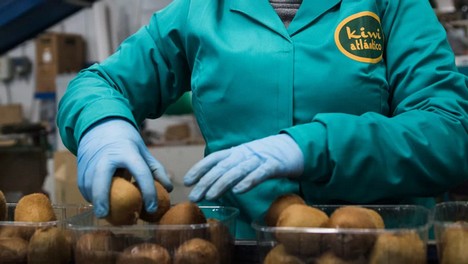 In the 2019/2020 campaign, which finished in July, there was a growth of 8% compared to the previous year. The COVID-19 outbreak in Europe and the greater consumption of foods rich in vitamin C were key factors in driving sales for the company that season, as kiwis are one of the fruits with the highest vitamin C content, an essential component associated with strengthening the immune system.

"From mid-March to May, sales grew by 20-25%," says Carlos. “There were several reasons for this. We mainly sell our fruit to supermarket chains and that is where people went to do their groceries in that period. Moreover, we decided to keep the prices as they were. This, added to the fruit's healthy properties, caused sales to rise,” he says.

According to the manager of Kiwi Atlántico, this positive trend will continue this campaign. “We expect sales to remain stable or increase slightly compared to last year. Also, the average caliber is larger than that of last season, so prices will be in line with those received up to now or even slightly higher.”

The company supplies quality kiwifruit all year round from the orchards of its partners and partnered producers, complementing the Spanish supply with fruit from Chile and Argentina. "We had our own production in Uruguay, but the plantations suffered asphyxia, similarly to what is happening now in Italy, and the trees began to die," he adds.

Search for yellow and red varieties that will make a difference
Despite the fact that the company is carrying out tests with colored pulp varieties, it continues to be mostly focused on green kiwis of the Hayward variety. "For now, we have not found a yellow variety that fully convinces us and which can become an alternative to the yellow Zespri kiwi," says Carlos Vila.

“As for the red kiwis, there are several that could compete with those of Zespri. They are little known and in this segment the brand is not as important a factor. However, that product will only succeed as long as it stands out from the yellow. If they both taste the same but the red variety is much more expensive to produce, customers will not consume it,” he says. “We have planted a kiwifruit variety that has a core of an intense red color, while the rest of the pulp is yellow, and whose taste has notes of fig, banana and strawberry. It could be a good niche product."

New investments
Kiwi Atlántico has been producing Spanish kiwifruit for more than 30 years. After increasing its production capacity through a project that came to a close last year, and which required an investment of more than three million Euro, the company has received the greenlight for a new project to expand its facilities and improve the automation of fruit sorting, which will involve an investment of another three million Euro. "The new facilities and calibrators will be ready for the 2021/22 campaign or for mid-2023," said Vila.