For apple growers, controlling the number of fruits on a tree is arguably the most economically important management practice. If done right, optimal yields per tree can increase total crop values by $7,000 per acre, compared to less optimal fruit numbers per tree.

A Cornell-led, multi-institution team of plant scientists, university and private-sector engineers, economists and outreach agents seeks to use computer vision, automation and robotics to optimize per-tree apple production, which is currently a highly manual and imprecise process. The national project includes representatives from the top apple-producing states in the country, including New York, which is second only to Washington.

The project is made possible thanks to a four-year, $4.8 million grant from the U.S. Department of Agriculture’s National Institute of Food and Agriculture.

“The project is aimed at helping apple growers meet market demand for fruit size and fruit quality to maximize return to the grower,” said the project’s director, Terence Robinson, professor in the Horticulture Section of the School of Integrative Plant Science, in the College of Agriculture and Life Sciences (CALS). 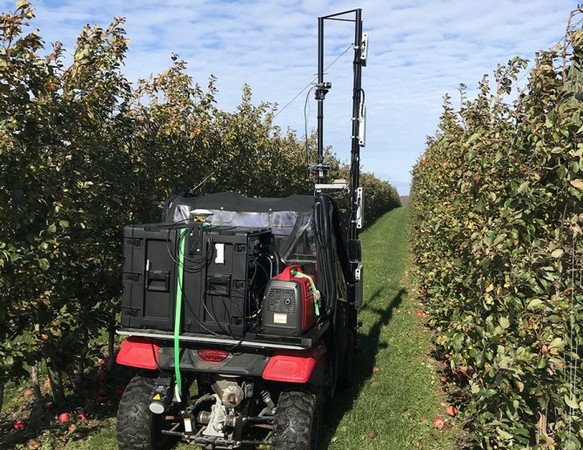 Each year, growers prune buds in winter and thin blooms and fruitlets in spring – both chemically and by hand – to control fruit numbers on their trees. Too many apples on a tree leads to small fruits, which get a low market price, Robinson said. If there are too few apples on a tree, they grow large and are priced high, but there are few bushels per acre, he said.

When flowers bloom, apple growers spray chemicals that regulate plant growth, which cause some of the flowers and fruitlets to drop to the ground, reducing the number of apples that develop. But it’s a difficult process to control.

In 2013, Robinson and other researchers introduced “precision crop load management,” a strategy for identifying how many apples a tree should produce, based on its biological potential. They also developed methods for physically counting the number of flowering buds on a tree in winter, counting flowers at bloom, and then counting fruitlets on trees about six weeks after bloom; at each stage growers may adjust what remains on the tree to meet an optimal number based on market crop value.

But the method is labor-intensive and technical, making it hard for many farms to maintain.

“Since 2013, I’ve been dreaming of potentially bringing computer vision, automation and robotics to bear on the problem,” Robinson said.

In the project, the first step will be to use cameras with computer-imaging software at three distinct periods to provide real-time counts of buds, blooms and inch-sized fruitlets. The varieties of apples must be taken into account. For example, Gala trees can tolerate higher numbers of buds than Honeycrisp trees, which have a fallow year following an overabundant one. Also, the optimum number of apples per tree varies by location with the biological potential of trees in one state being different than in other states.

Cornell impacting New York State
The project will proceed along parallel tracks with the biology team conducting research to define the biological potential of each region of the country and each major variety, while the engineering team plans to develop an automated robotic vehicle equipped with the computer vision system, which at first could supply counts for a few representative trees in an orchard. Eventually, Robinson envisions robotic vehicles driving through rows and counting every tree, then downloading the information remotely for processing. The machine would also measure trunk diameters, which allows for a measurement of optimal bud numbers based on tree size.

Robinson said this could eventually lead to two scenarios. In one, bud, bloom and fruitlet information is transmitted to workers with earbuds, GPS and cellphones, with pruning instructions. Another possibility is to develop robotic pruning machines, with pruning parameters encoded in software; the machine would receive the information and work down a row, removing branches, buds, flowers or fruitlets based on pre-calculated numbers for each tree.

The team plans to work initially with a select group of growers in each participating state who will serve as early adopters of the technology. Once evaluated, extension agents will hold field days and demonstrations, and present the technology, biology and economics of the system to more leading growers.

One of the project’s co-principal investigators, Miguel Gomez, associate professor at the Charles H. Dyson School of Applied Economics and Management, will evaluate the economics to calculate how much money growers can make by taking these steps and how much the technology might cost them. Moog also has analysts who will work with Gomez. Since such a system may prove expensive for small growers, options could include offering the technology as a contract for the service, while larger growers may purchase the technology outright.

Ultimately, the technology has potential in almost all tree fruit crops, Robinson said.