Turkey is one of the largest apple producers in Europe. Traditional small-scale apple orchards still form a significant part of that country's apple production. So, it isn't currently a prominent apple exporter.

The country's different geographical regions allow for the cultivation of hundreds of apple varieties. But only a few of those are sold commercially. Commercial orchards are generally located in the southern part of Central Anatolia and the northern Mediterranean areas. 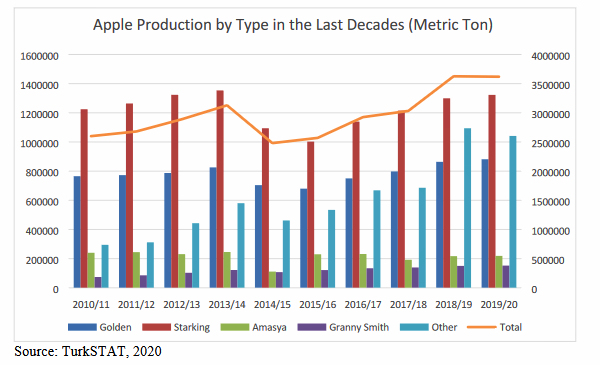 About 50% of the commercially produced apples come from three provinces - Isparta, Karaman, and Nigde. Farmers in Isparta grow the most apples, with around 850.000 tons per year. Commercial apples are also cultivated in Antalya, Konya, and Amasya. With 500,000 tons, Karaman is Turkey's second-largest apple-farming area.

The country's most important apple varieties are Red Delicious (or Starking Delicious), Golden, Amasya, and Granny Smith. These represent 70% of the 2019/2020 total production. Red Delicious is the most popular kind and makes up approximately 37% of all Turkey's apples.

About 80 to 90% of the apples grown there as eaten fresh. Around five percent is processed into juice, canned goods, vinegar, or dried products. The remaining five to ten percent is exported.