On Tuesday November 3rd, Hurricane Eta made landfall in Nicaragua after having brought heavy rainfall to the region. After raging through Nicaragua, the hurricane hit Honduras and Guatemala and is currently heading for Florida, though it has since weakened to a tropical depression. Along with heavy rainfall, the storm has brought major damage to the infrastructure of both Honduras and Guatemala. 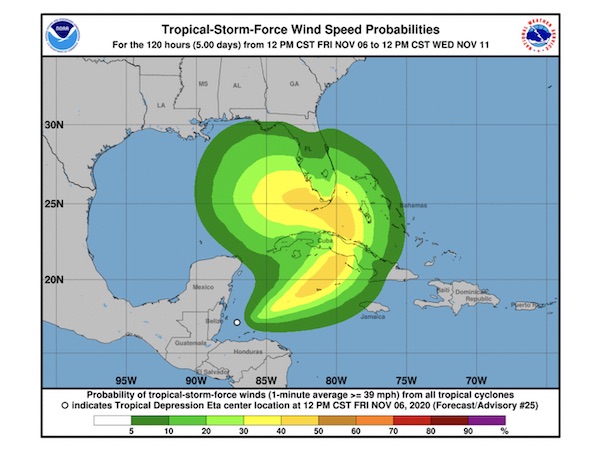 Road damage hampers logistics
Growers Are Us imports sugar snaps and snow peas from both Guatemala and Peru, and the Guatemalan season for these products has just begun. “The biggest impact is on the roads,” Dan Wahl, CEO of the company, shares. “Right now, most transport from the farms to the ports has been blocked because of the damage to the roads, which are completely washed out. Since about 95% of the product is sent by ocean freight, this is an issue. Even if the authorities are able to restore the roads in the next few days, it will take time for the ports to work through the backup that is now being created and to get running at normal capacity again. This is impacting not just the sugar snaps and snow peas, but all products that are exported from Guatemala by ocean freight,” Wahl shares.

Rainfall also affects crops
The heavy rainfall from the storm has also had an impact on crops. Wahl explains: “There was some damage, specifically for the sugar snaps and snow peas, which will manifest itself in some quality issues. Fortunately, this isn’t something that will have a long-term effect on the products, and these issues should resolve themselves pretty quickly.”

Honduras is experiencing similar issues, Wahl shares. “They got hit a lot heavier by the storm and they are also seeing a lot of back-up in the ports due to road damage,” he says.

The storm is moving slowly, at about 7 miles per hour, and while it has now weakened to a tropical depression, it is expected to re-strengthen into a hurricane before hitting the Florida Keys today.