For a long time, Brussels sprouts were rather a marginal phenomenon in southern Germany: But now, this vegetable is gradually gaining in importance in the southern German states as well. In the specialized retail trade -for instance at weekly markets and in farm stores- the unique cabbage vegetable is quite popular, says Ronja Haap, passionate vegetable producer in Kernen (Baden-Wuerttemberg), on the start of this year' season.

Normally, the first Brussels sprouts should have been there long ago, according to Mrs. Haap. "We will now start to harvest two weeks later." This is clearly due to the weather. As the spring weather was too dry, growers expect to mainly see smaller sprouts. "We also expect lower yields compared to the previous year." 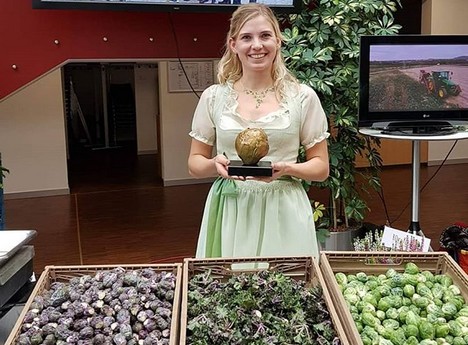 Ronja Haap at the local RoKoKo 2018, a festival in honor of the Brussels sprouts. The Brussels sprouts are either sold at the farm store, or in 5kg EPS crates at the Stuttgart wholesale market. Depending on the weather, the sprouts will be available until mid-February.

Third generation growing Brussels sprouts
The grandfather of the current owner decided some decades ago to grow Brussels sprouts. Nowadays the vegetables are cultivated on about 3 hectares. Haap: "We have been able to gradually expand the cultivation capacity over the years, but I think we have now reached the limit." 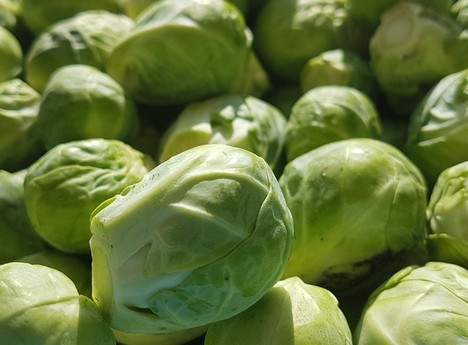 Nevertheless, the demand among regional customers seems to increase. "Particularly in the last few years, vegetables have become trendy again. We focus on regionality, because the direct route to the consumer is particularly important to us. This means that our Brussels sprouts reach regional customers, mainly weekly market traders and farm stores, either via our own stand sales at the Stuttgart wholesale market or via our farm store."

Steady increase in sales of Flower Sprouts
In addition to the 'traditional' Brussels sprouts, colorful flower sprouts also thrive on the classic vegetable farm. Haap: "In 2016 I wrote my bachelor thesis on this novel cabbage vegetable, and since then we have been offering it every year." Both in terms of cultivation and marketing, this specialty crop is making gratifying progress. "We are observing a steady increase in sales, especially in the farm store the Flower Sprouts are well received."

Flower Sprouts also started the new harvest season with a slight delay. The first batches are ready for harvesting from week 46 onwards. At the wholesale market, the visually striking vegetables are offered in 1kg crates.

Christmas sales at risk?
The effects of today's Corona crisis at Gemüsehof Haap are still only minimally noticeable. However, the pandemic could also have a negative impact on the marketing of all cabbage crops, we know: "Normally, as with Brussels sprouts, we see a doubling of sales in the pre-Christmas period, starting around week 50. Whether this will also be the case in Corona times is the big question mark for us at the moment."