To say that British Columbia apple growers had a challenging season would be an understatement.

“We’ve seen hail—lots of hail—and through the summer, we saw cloudy, rainy weather. And to top the year off, we just had an early freeze with lots of snow and it’s all putting additional challenges in front of our growers,” says Warren Sarafinchan, chief executive officer with the BC Tree Fruits Cooperative based in Kelowna, BC.

He notes that when the freeze did come into the region on the third week of October, the majority of the apple crop was off the trees. “We had some left on the trees and we’re working with our growers to maximize the value of that crop on the trees,” adds Sarafinchan. Part of what’s being determined is likely what percentage of the crop is salvageable for by-products such as juice. 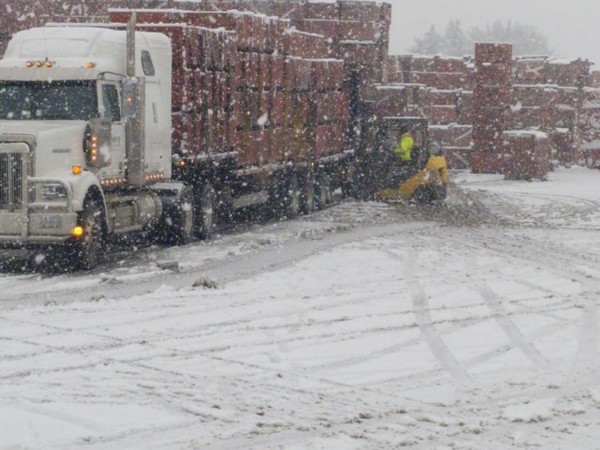 Overall, the crop size looks relative to last year. “But all packers right now are working to deal with fruit that was impacted by the recent weather,” says Sarafinchan.

Multiple labor issues
Also factoring into this are labor issues which carried over from BC’s cherry season. BC has a unique combination of three sources of labor generally: foreign temporary workers from countries such as Mexico and the Caribbean; workers from other provinces such as Quebec; and then international backpackers. But this year, a myriad of COVID-19 related problems complicated the arrivals of all of those sources of labor from challenges and significant delays bringing in workers from other countries to the unknown about interprovincial and international travel hindering the remaining two labor sources. Glen Lucas, general manager of the Kelowna, BC-based B.C. Fruit Growers’ Association estimates that normally labor sits at approximately 7,000 workers but for 2020, BC saw only approximately 3, 300 workers.

However, the labor issues hit apple growers harder than the cherry growers who tend to kick off the BC tree fruit growing season. For one thing, the lack of labor labour delayed harvest of the apple crop which left it susceptible to bad weather. “Also, the cherry crop was lighter so having fewer workers provided a balance. They were scrambling but my sense is that most cherry growers got through,” says Lucas. 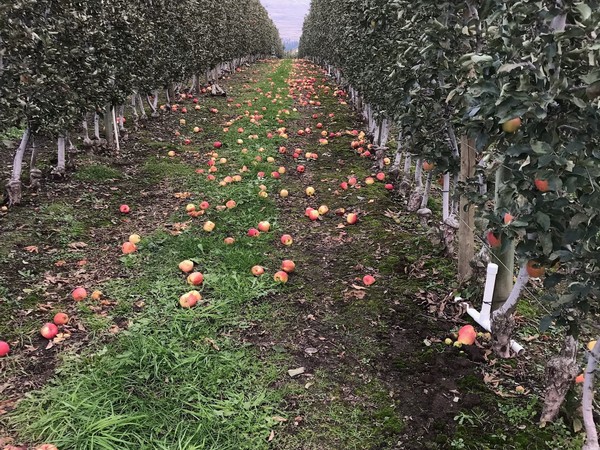 Fallen apples after the storm.

In fact, the lack of labor was so dire at times it forced growers to come up with alternatives. “I’ve talked to a number of growers and one in particular had to take his kids out of school and they were all picking apples and his wife was managing the irrigation lines,” says Sarafinchan. “Families have to work differently to get the crop off and it’s a real testament to the grower families that we have in the region.”

Historical concerns
All of this is happening on top of the pre-COVID-19 challenges BC apple growers have also long been seeing. “We had a long-term trend where we saw slight reductions in apple acreage every year.

Production had been going down for the last 50 years,” says Lucas. “But that halted about five years ago and we levelled out and didn’t have as much fallen acreage three years in a row. But last year we saw that contraction again and that was before both COVID-19 and the freeze. So, we are concerned.” 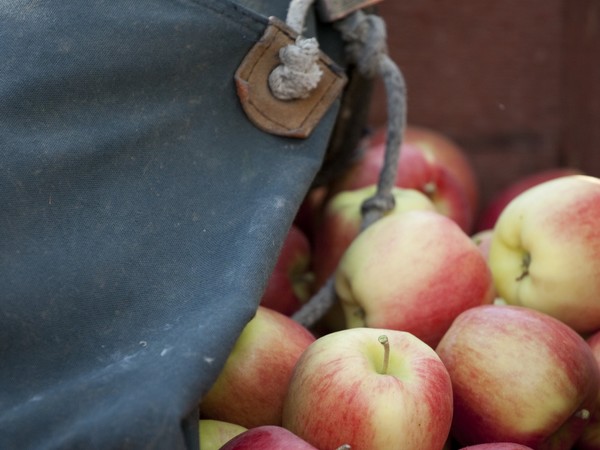 What the industry would like to see is more support from likely the BC provincial government, one that just underwent an election which could delay movement on the issue. “We know in the U.S., apple growers received support—in Canadian terms it was $.7 cents/lb. And we have not received that. That was before the freeze. It’s very challenging times for apple growers,” says Lucas. That said, the industry says it has a good relationship with all levels of government and continue to work with them to find support for longer-term solutions.

So, what does this mean for next year’s season? “We’ve seen some apple growers move to other types of fruits such as cherries,” says Sarafinchan. “And I think the world apple market is trying to find itself and what the right level of production is. We’re like many packers around the world—we’re trying to figure out how to deal with those changing dynamics.”