After an emergency assessment, LA UNIÓ de Llauradors reported  that the storms that have just been recorded in the Valencian regions of Ribera Baixa and Ribera Alta have caused losses estimated at about 8 million Euro, and that without taking into account the damage caused by waterlogging in the fields. It is therefore an initial estimate as at the moment it continues to rain heavily in some areas and more hail could also fall. 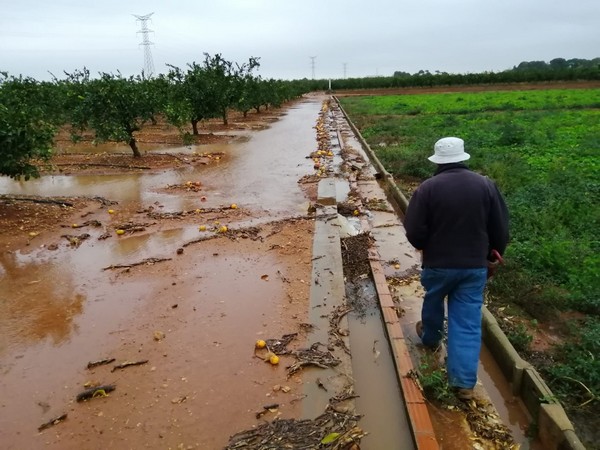 The area that has been most heavily hit by hail has approximately 1,100 hectares devoted to citrus fruits, kakis and vegetable crops. The most affected municipalities are Almussafes, Alginet, Benifaió, Sollana and Sueca. Kakis are the most affected, with about 579 hectares, followed by citrus, with 417 hectares, and finally vegetables, with 147 hectares. The extent of the damages is highly variable, depending on the area and age of the plantation.

To this we must add the damages caused by the accumulation of water in the fields, which will only be possible to estimate after a few days, and which also affects the regions of La Safor and Marina Alta, which is where the most rainfall was recorded. Possible damage to agricultural infrastructures such as roads, margins, greenhouses, irrigation systems or agricultural warehouses will also have to be taken into account.

On the positive side, the heavy rain has cleaned out the sooty mold that the whitefly fungus causes to appear on the fruit.

LA UNIÓ is demanding the implementation of urgent measures for those affected, such as the granting of aid, the reduction of the personal income tax module, the cancellation of the IBI of the cultivated plots and buildings present in them, the reduction of Social Security contributions for one year, the granting of loans with subsidized interest and also a series of actions and aid for the affected marketing cooperatives. Regarding insurance, LA UNIÓ will ask Agroseguro to speed up the assessments.

Rainfall has been good for other areas
In any case, in those areas of the Region of Valencia where neither hail nor abundant rainfall have been recorded, the rains have been very well received and will have a positive impact, if we ignore the delays in the harvests that were currently underway.