"Although production has slowed, we will still sell all we have on the domestic market"

A Western Australian food company says demand for its Dried Bravo Apple Slices continues to rise, despite having an extremely challenging year with the coronavirus impacting the market.

Southern Forest Flavours Director says while the market has narrowed it is still popular with the consumers. But he admits one of the biggest customers was an inbound tour company, which could not access the state due to border closures.

"He'd bring though people from Hong Kong, Singapore and Malaysia, and other countries, and while they were on the bus going around WA, they would buy to take back with them," he said. "It was a great captive audience but when the borders went up his business shut down. We have been focused on the domestic market. We have not thrown any marketing or promotion at it, we just put it out there and it sells itself." 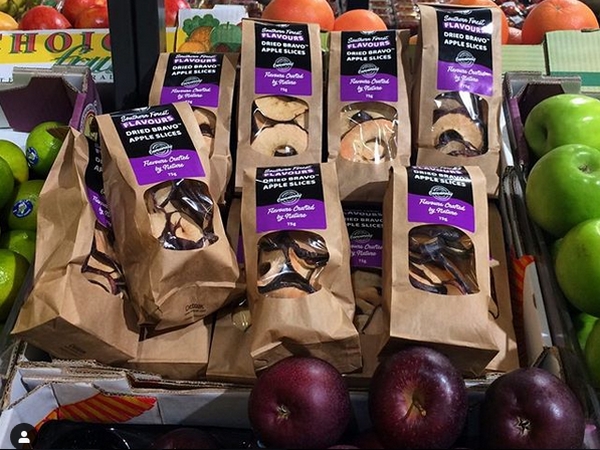 The company was formed by Mr Eatts and Dave Ritchie as a way to make the most of ripe fruit that would otherwise go to waste.

"The bar is set quite high for Bravo Apples because it is a premium grade," Mr Eatts said. "We are just utilising the composite or second grade, which is still a good quality apple but finding a use for the product instead of it going into juice. The apples are usually picked in April, and they go into the cool store. We probably have around two more batches to process and the apples are finished, and we won't get any access to the fruit until next April or May next year."

The Bravo variety was the creation of the Western Australian Department of Agriculture and Food, with trees were first supplied to commercial growers in 2014. The variety is a cross between the Royal Gala and Cripps Red.

"We don't put any additives, preservatives or sugars in it," Mr Eatts said. "The apples are just cored, sliced and dried. It is high in antioxidants and because it is unoxidized you can dry it without it going brown. So, it has been a real winner for us. A great one where we can process, and even though production has slowed, we will sell all we have on the domestic market."

The product has more than a 12-month shelf-life and is available at selected greengrocers and IGA supermarkets around the state.

"The shopkeepers and retail outlets have been really good and looked after us," Mr Eatts said. "They often put it next to the fresh apples, which helps. Once people try it, I have not heard anyone say a bad word about it. They just can't believe how good it tastes. It has been a product that works well for us."

The company also produces "Strawberry and Apple" and "Passionfruit and Apple" fruit bars that are subject to the availability of the fruit.