The blueberry harvest started strong in October and it is expected it will end in early January. Even though 2020's production is expected to be similar to previous years, the sector is not immune to the social impact that the pandemic generates in the country: increased poverty, higher unemployment and informality, and the lack of protection for vulnerable populations.

The Argentine Blueberry Committee (ABC) has been working with Desarrollo y Autogestión (DYA), an NGO specialized in the prevention and eradication of child labor, for more than a year to implement a voluntary series of prevention, monitoring, and care protocols in the fields to prevent child labor and to promote the education of children and teenagers.

The productive areas of Tucuman and Entre Rios joined the PAR project (Responsible Agricultural Production) by trying out the system in 3 companies: PDJ, KINGBERRY, and EXTRABERRIES. The provincial and municipal governments, the Ministry of Labor, UATRE, and RENATRE have expressed their support to the model. 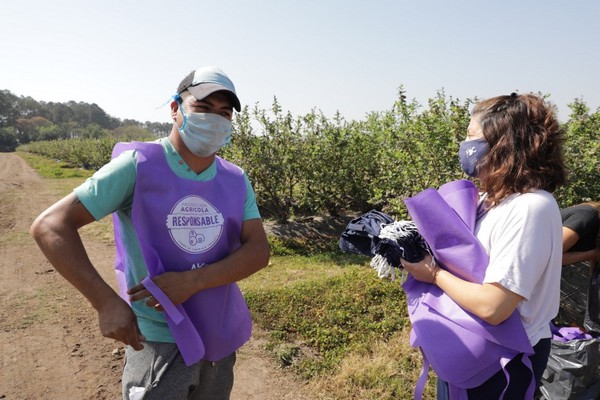 The system's three pillars: prevention, monitoring, and care
To prevent child labor, training workshops have already been held and communication campaigns with graphic pieces have been activated in the territories and social networks.

Contractors, field managers, and producers were given an app to help monitor, detect, alert, and deal with any possible moment in which a minor tries to enter a productive field. The app triggers an alert to the communities' social service areas so that they take action.

Finally, the group has created alliances with foundations, companies, and unions to carry out Corporate Social Responsibility actions, such as digital educational points, the construction of care centers in rural communities, occupational training workshops for adolescents, among others.

“The ABC has been working on the development and execution of a national social strategy. Designing this Social Compliance System, which focuses on the workers and their families, was a key link in our strategy. We are convinced that preventing and creating awareness of child labor can only be achieved by working together at the national, provincial, and municipal levels,” said Federico Baya, the president of ABC.

"In the current scenario, there is a greater probability there are incidences of child labor. Thus, the articulation between the public and private sectors is vital to effectively reach families with a solid network of educational and health services," stated Maro Guerrero, the director of DyA.