Not long after its successes on Dutch soil, ENGIE Refrigeration has introduced its condensation drying technology in France. From now on, two arable farmers near Orléans can dry and store their onions without using the outside air. 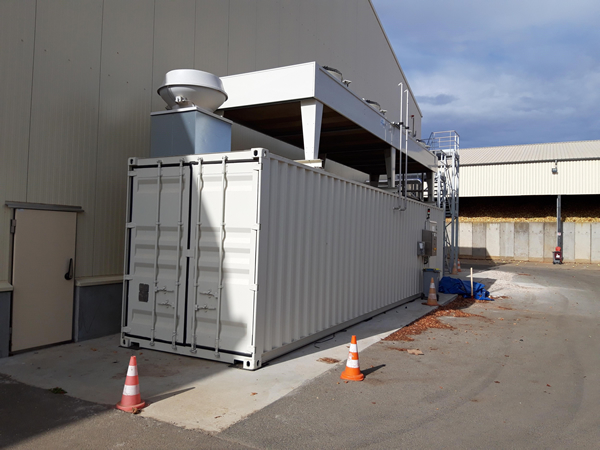 Onions that rustle
Rustling onions after one day. A drying process that works twice as fast. Constant product quality and 80% fewer energy costs. ENGIE Refrigeration has kept its promises to several clients in the Netherlands, such as Custer’s Farm, the De Zeeuw brothers, and arable farm Mul Zeewolde.

ENGIE’s condensation drying system deals once and for all with the unreliable outside air. By bringing the air in the closed system below the condensation point, moisture is discharged and onions dry. The heat released during cooling is used to keep onions at the right temperature. A heat pump makes it possible to heat onions to combat diseases. With the condensation drying technology, arable farmers can accurately control drying and storage conditions, without the use of gas, chemical sprout inhibitors, and it produces less CO2 emissions. 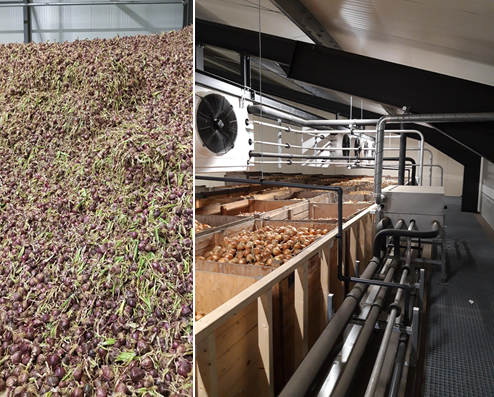 Such successes do not remain unnoticed. “Via a French agricultural advisor and a Belgium constructor of agricultural facilities, Raes Construct, we came into contact with various clients in France”, says Stefan Huijsmans, project manager at ENGIE Refrigeration. A visit to the Netherlands followed, which gave French arable farmers an insight into the technology. That’s how things started rolling in France. Simon Stéphane, a potato and onion farmer in Beauce, was looking for a modern storage solution that retains the quality of his organic onions.

Organic products, more advantages
Simon’s brand new condensation drying system has been running since May 2020. Huijsmans: “We built two storages for bulk storage of two times 600 tons of organic onions that can later be used for crate storage. The installation can dehumidify 236 litres per hour on every 600 tons of onions, which equals 5,000 litres per 24 hours. If you would like to achieve that with a traditional storage system, then you are highly dependent on good weather conditions, heating capacity, and a lot of gas. Not only is it very expensive and environmentally damaging but it's also very risky due to the higher temperatures in which bacteria thrive. ENGIE’s system can dry crops with cold temperatures so that rotten crops cannot infect others.”

Condensation drying can make a difference, especially with organic cultivation. Because crops are not treated with chemical inhibitors, the product is more lively and produces more moisture. That makes the product vulnerable to mould and bacteria. ”Low temperatures and stable conditions during the new storage method keep crops calm and prevent them from germinating. This way, Simon can control the process better,” Huijsmans explains.

Natural refrigerant for utmost energy efficiency
Also enthusiastic about ENGIE’s condensation drying technology is Ferme des Arches. 45 farmers are affiliated with this cooperative in the Beauce region. 1,600 tons of onions, shallots, and garlic is stored in two new storages, 8,00 tons in each cell.

“Every hour, the condensation drying system extracts 450 litres of moisture from each cell. Crate storage enables the cooperative to store, process, and trade batches of onions more quickly. If there is a bad batch that needs to be dried quickly, the crates are placed in front of the bladder wall. This wall eliminates gas and is therefore much cheaper. The natural refrigerant ammonia (NH3) in the installation provides the utmost energy efficiency.

Together with turning off the gas tap, this makes production much more sustainable and energy-efficient.” 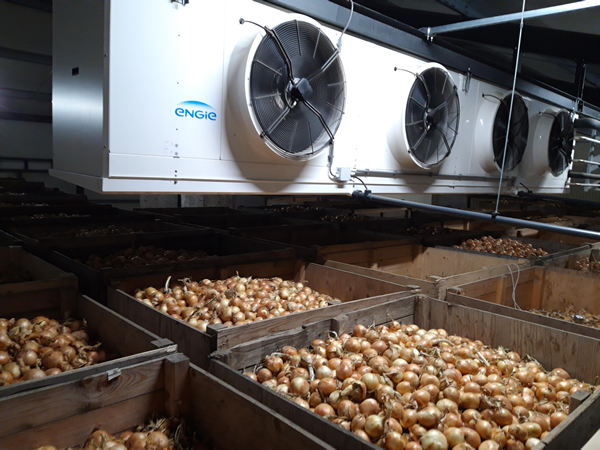 Market potential
Thanks to their condensation drying installation, Simon and Ferme des Arches stay ahead of the competition. Huijsmans explains: “Drying and storing without the outside air was a Utopia. Due to changing climate conditions, growers demand to control temperatures and to make their production more sustainable. In addition to that, using chemical inhibitors is no longer accepted in Europe, which is why farmers have to store their products in colder temperatures. A closed system such a condensation drying thus becomes more attractive.”

“France has a lot potential”, Huijsmans argues. “The agricultural Beauce region is enormous. Countless arable farmers of onions and potatoes store their products in conventional storage systems. Condensation drying is an excellent storage solution for all their products, especially because the French government grants an attractive subsidy to sustainable companies. That financial compensation is a valuable incentive to invest, thus there are plenty of opportunities for condensation drying.”