A Queensland apple-growing family claims to have created a world-first fruit drink that bottles all of the apple, minus the pips and core. The Savio family from Stanthorpe spent more than a million dollars and three years in R&D to get both the skin and the pulp of their apples into a commercially acceptable liquid form. Their new product, Upple, is neither a juice nor a nectar. The Savios pitch it as a filling snack and healthy drink.

"One of the things I looked at prior to even coming up with any specific idea was we had to look at things that other people aren't doing," grower Johnny Savio said. "When an apple is juiced, you throw away the really nutritious parts of the apple, which is the peel, and the pulp, which is fibre," explained brand consultant and project leader Deb Loosely. So the challenge was, how could we take a whole apple and value-add it in a way that retained the whole apple goodness?"

Grower says retailers reject more fruit
The Savios decided to value-add to offset a steady decline in apple income, which Mr Savio blames on increasingly tough retail specifications. Eating-quality fruit with small blemishes which was good enough for supermarkets 10 or 20 years ago is now rejected.

"Anything that's just a tiny bit off the mark is basically downgraded to a juice price, and juice price is unviable for us to be in business," Mr Savio said. He consulted food processing engineer Gordon Young to turn his idea into a commercial product. His key request was it had to taste like a fresh apple. 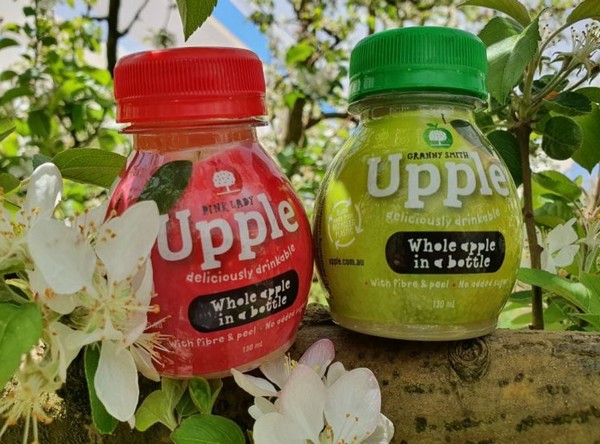 That was achieved with the assistance of the University of Queensland, which also helped measure apple fibre particles so they couldn't be noticed in the mouth. After two years of pulverising apples, Mr Young has a successful process that has a patent pending.