The NFU is urging government to provide immediate clarity on how fruit, veg and flower businesses will be able to recruit seasonal workers next year. The call comes as a new industry-wide survey shows that despite the widely publicised Pick for Britain campaign, UK residents made up only 11% of the workforce this year.

The NFU’s Horticulture Seasonal Worker Survey 2020 was completed by 244 horticultural growers, recruiting over 30,000 people. This equates to just under 50% of the workforce.

According to a report by Andersons, labour costs for horticultural businesses have risen by 34% over the past five years. This year, the impact of COVID-19 has seen those costs rise a further 15%.
According to Defra, the horticulture sector is worth some £3.7 billion to the national economy.

NFU Vice President Tom Bradshaw said: “We are at a critical time in recruitment for many growers. As freedom of movement ends on 31 December, those growers of iconic British daffodils, asparagus, and soft fruits still don’t know where they will recruit experienced workers from.

“The Pick for Britain campaign was a great initiative, and many have suggested we could continue to recruit a domestic workforce for the coming 2021 season and beyond. While there was a fantastic response from Brits to the call for domestic workers this year in extraordinary circumstances, we see from the survey results that they only made up 11% of the workforce. Seasonal work on farm simply isn’t a viable solution for many." 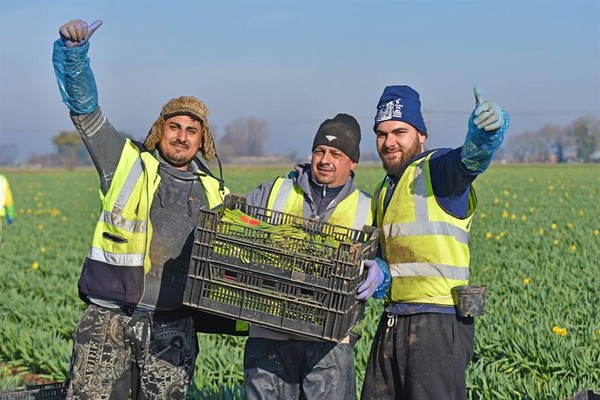 “What we’re asking of them is huge; in reality it means people needing to work in very rural areas, away from their homes and families, where they will only have guaranteed work for between three and six months. We saw this challenge captured in our results, with first-time UK resident workers staying for nine and a half weeks on average, compared to just over 14 weeks for first-time non-UK workers and 18 weeks for returnee non-UK workers, whose skills and experiences farm businesses rely on.

“Understandably, these workers continued to look for work closer to home, meaning many left farms part way through their contract and leaving growers having to re-recruit, which impacted on overall productivity levels and increased production costs. Workers from outside the UK are absolutely vital to the success of our horticultural sector and we have ambitions to grow more fruit and veg at home. But this success story continues to be undermined by a consistent shortfall in workers over the past four years and rising costs. It creates an unsustainable situation for growers and puts the resilience of domestic food at risk.

“The frustrating thing is this situation is easily solved with the implementation of a seasonal worker scheme, building upon the pilot scheme that has already operated successfully for the past two seasons. If this is not in place by the beginning of the year, we would be the only developed country in the world without such a scheme. It would seem remarkable for the government to take such a gamble when it will hit UK businesses at a time when economic recovery is paramount. I call on government to act now, support our ambitions to lead a horticultural revolution in this country, growing the food that is so critical as part of a healthy diet, and ensure growers have an experienced workforce recruited in time to see this ambition become a reality.”