While the US hurricane season is getting near its end, usually being cited to end on November 30th, a new hurricane has hit the US Gulf Coast: Hurricane Zeta. The hurricane made landfall Wednesday afternoon in Southeastern Louisiana, and brought heavy winds, rain and tidal surges to the Gulf Coast. By Wednesday evening, the hurricane had already left over 350,000 people without power. The hurricane is classified as a Category 2 storm, and has winds of at least 90 mph. 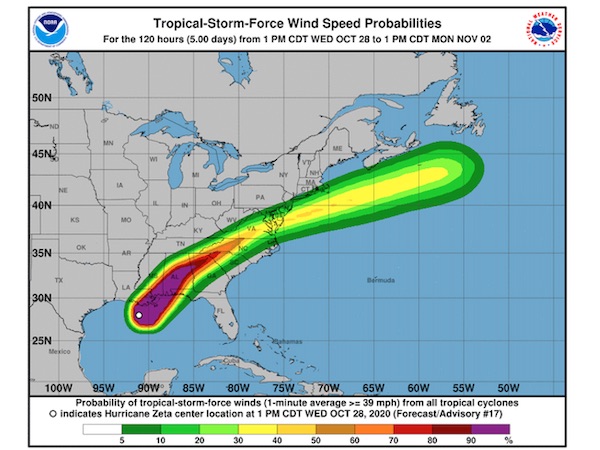 Making landfall in Louisiana, again
This is the fifth storm to hit Louisiana this season, which is a record number for the state. Hurricanes Laura and Delta were the most recent storms to hit the state, and many people are still recovering from the damage. Sweet potato growers in the state fortunately haven’t seen much damage from the previous storms to come through the region, and harvest wasn’t delayed. The main reason for this was because while the hurricanes brought heavy winds, they didn’t bring much rain for Louisiana. Other regions recent hurricanes passed through, such as Mississippi and North Carolina, saw more rain effects and a slight delay in the sweet potato harvest as a result.

A similar pattern is expected for Hurricane Zeta, bringing heavy winds to Louisiana and rainfall more inland. Heavy rains are expected to hit Georgia and the Carolinas today as a result of the hurricane.

Concern for Mississippi sweet potatoes
Heavy winds aren’t too big of a concern, generally, for the sweet potato crop. “The fields shouldn’t see much impact from heavy winds, the only issue we could see is the housing of the field workers getting damaged,” Sylvia Clark of the Mississippi Sweet Potato Council shares.

Clark adds: “Most of the growers in Mississippi are set to finish up their harvest in the next week or two, and the harvest has been going well; the rain from previous hurricanes hasn’t caused too much damage. So far for Hurricane Zeta, though, we’d seen more rain leading up to it than we saw with the previous ones. The additional rain that we might see from the hurricane combined with forecasted chilly weather next week is definitely a concern.”

Heavy winds expected to hit Central Alabama
Alabama has seen some damage to their nut trees and row crops from the previous hurricanes, specifically from Hurricane Sally. For Hurricane Zeta, the Alabama Department of Agriculture & Industries’ Emergency Program Department is working on alerting the farmers in the state to the oncoming weather. Brie Lowery shares: “The only thing we can do ahead of time is to make sure that everyone is well informed. For the row crops and the tree farms there really isn’t much else you can do to prepare for something like this.”

Hurricane Zeta is expected to bring tropical storm force winds to the Central Alabama region. “This is higher up than the winds usually reach, and we are also seeing a larger amount of storm surges in these areas than we originally expected, so we are a little apprehensive about what the hurricane will bring. We’ll continue to coordinate with the state and the farmers, besides that all we can do is wait to see what happens.”