Seventy farming families with less than a hectare each in Northern Peru’s Chira Valley came together in 2017 to form Cooperativa Agroperu to produce organic fair trade bananas and other fruit, trees and food crops. They are trying to break out of the prevailing, and unsustainable, monoculture production model that even some organic growers have become trapped in. They have also sought to learn lessons from the experiences of the 20 year old industry in Piura province and stand out for their good labour relations as well as for their innovation in production methods.

We reproduce below an interview with José Correa, an organic banana farmer from Piura and co-operative member that first appeared in the newspaper Perú21. 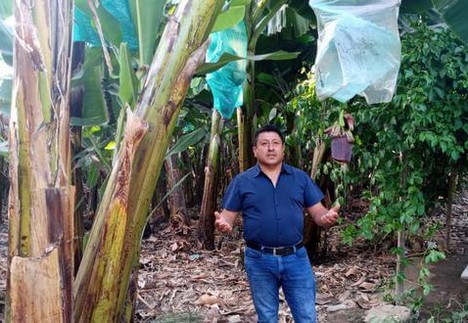 “In Sullana we have the best banana, in terms of taste and safety,” says José Correa, an organic banana farmer from Piura.

Huancabamba is like a paradise. This is how it is defined. “All green, all beautiful,” he describes. The city is small, but for its total extension, it is among the largest provinces of Piura. It borders Ecuador, Cajamarca and Lambayeque. “It has the climates of the coast, the mountains and the jungle“, he says about the land where he was born, an hour’s walk from one of the Huaringas lakes.

Six hours away by truck is El Cucho, in Sullana, on the coast of Piura. It has about a thousand houses and is where José Correa Cruz now lives and where he grows organic bananas for export. This fruit has improved the economy of several citizens in the north of the country.

His father was a cattleman and farmer, and in 1994 they migrated. They sold everything and left behind the potato, oca, olluco and barley crops in Huancabamba. José was 17 years old. “Our parents always encouraged us to work,” the farmer with more than 20 years of experience in bananas explained on the phone.

In June he had planned to travel to Germany, but because of the pandemic it was not possible. Today he wants to export without intermediaries, study international business and let the bananas take him far away.

The full interview is available on BananaLink.org.uk