NEPG: Potato acreage should decrease by a minimum of 15 %

The NEPG (North-Western European Potato Growers) estimates that the total harvest will be 27.9 million tons this season if all potatoes in the ground will be indeed harvested. The harvest is later than usual with all the risks involved and there are still some potatoes in challenging wet areas in Western Belgium and Great Britain. This is 4,5 % or 1 million tons more than last season in the 5 leading potato countries. The NEPG considers that the growers in the North-Western EU will plant totally 15 % less next spring. Due to Covid-19 the worldwide demand for processed potato products decreased enormously and the actual demand for raw material from the factories is about 85 % compared to last season, before the pandemic. The actual low free-buy price level for processing potatoes is emphasizing this.

Volume reduction of the contracts
European and Northern American potato processors have large stocks of ready products in their cold-stores and need less raw material for a longer period. It is expected that they will reduce their next year’s contracts in volume with the growers and have hardly interest in free potatoes. Due to the actual cost of growing and storing potatoes a reduction of the contract prices is not expected.

Over the last 5 years, the NEPG growers increased their consumption potato area by 7.7 %. The increase in France was almost 14 % and Germany 10 %, however, also the other countries increased their area. This increased area is an enormous contrast compared to the slower growth of the demand for raw material by the factories, and reduction since the Covid-19 situation. With the upcoming second lockdowns in several countries, the NEPG expects no changes over the upcoming season. On top of this, the result of the Brexit discussions could influence the market.

Transition season
Due to new regulations for storage (the ban on CIPC and the  introduction and use of “new” sprout control products), especially the longer storage this upcoming season can be considered as challenging, a transition year. The availability of some new anti-sprouting materials is lower than growers need, and their use is more expensive and more difficult (adapted warehouses, gassing equipment,…) technically than with CIPC. The NEPG expects that fewer growers will go for the extreme long storage and it is strongly advised to re-calculate the cost-price before signing any contract. 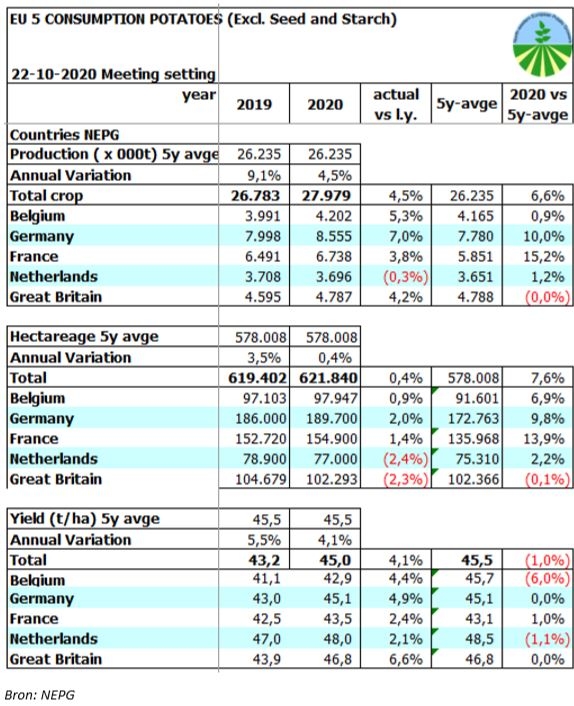