Earlier this week, a Reddit user posted this: “My whole neighborhood in north Minneapolis got these food boxes”. The statement was accompanied by a picture showing a gallon of milk, a bag of onions, some sour cream, and a folded letter from the White House. It seemed to be a gift sent by president Donald Trump.

“I feel like we were targeted to try and buy votes,” the poster said. “Of course Trump sent a letter with [it] to make sure we knew it was his ‘good’ deed.”

In a subsequent reply, the original poster says they live in the Cleveland neighborhood, and are not enrolled in any aid program.

In a private Facebook group for the Victory neighborhood, also in North, one resident posted photos of the same box, adding: "I'm confused as to why I received this..." 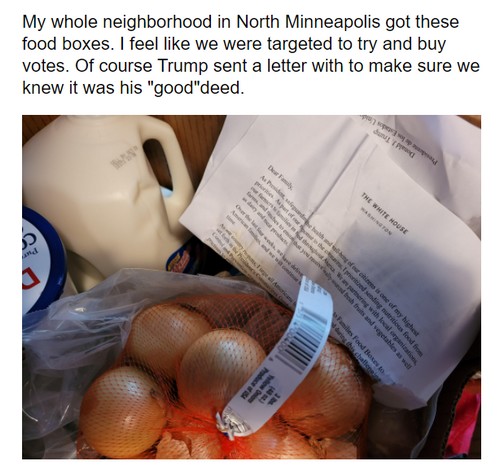 These boxes are part of a $4 billion coronavirus food assistance program, sometimes called Farmers to Families Food Boxes, which was announced back in April.

Basically, the United States Department of Agriculture buys fresh produce and other products from “American producers of all sizes.” Then it’s packed into family-sized boxes and distributed to food banks, community groups, and “other non-profits serving Americans in need.”

Still, it’s not the food itself that’s raising the most eyebrows. It’s the letters included with it, which have been creeping their way into the boxes over the past few months.

“Dear Family,” it begins warmly. “As president, safeguarding the health and well-being of our citizens is one of my highest priorities. As part of our response to coronavirus, I prioritized sending nutritious food from our farmers to families in need throughout America.”

According to citypages.com¸ the letter also asks the reader to do their best to prevent the spread of disease, including washing hands, staying home if they’re sick, and “consider[ing] wearing a face covering when in public.”