"The domestic demand for pomegranates is increasing considerably"

This season's Spanish pomegranate production has been reduced by around 30-35% due to the impact of the weather conditions. For now, this lower supply is favorable for the product's marketing. 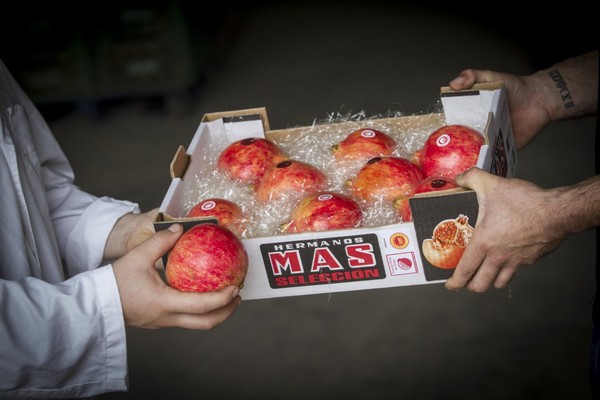 "So far, the campaign is going well. The domestic demand is growing considerably and the main Spanish supermarkets are already asking for Mollar de Elche pomegranates with the Protected Designation of Origin. The largest operators know that there is a lower supply available and many have, therefore, increased the purchase price to ensure that the Mollar de Elche pomegranate is on their shelves for as long as possible," says Francisco Mas, commercial director of Frutas y Hortalizas Mas Serrano, a producer and exporter of pomegranates.

Based in Elche, Europe's biggest pomegranate producer, Frutas y Hortalizas Mas Serrano exports around 6,000 tons of all varieties, with a harvest schedule that runs from August to January or February, depending on the year. They also grow artichokes, figs and peppers; products with which, as with pomegranates, they intend to continue growing in terms of volume year after year.

"Our plantations are located within a radius of about 60 kilometers, so we can say that it is a local production," explains Francisco Mas. The Alicante-based company produces and markets the Smith, Acco, Valenciana and Wonderful varieties, as well as, as Francisco Mas calls it, "the queen of all pomegranates", the Mollar de Elche. 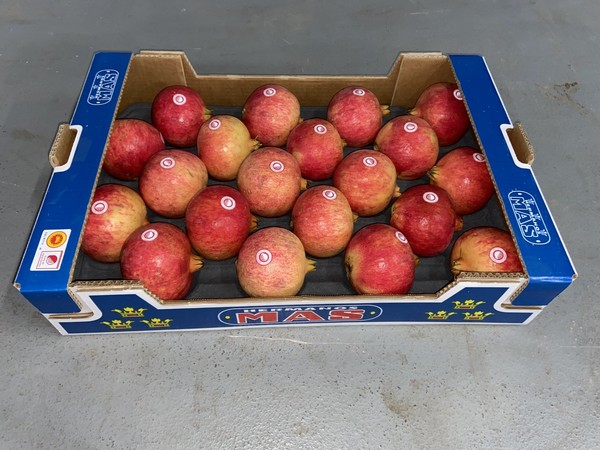 "The first to be marketed, in mid-August, is the Smith, which is characterized by being a very sour pomegranate but which, due to its harvest time, does not overlap with the productions from other countries."

"The Acco, which is available a couple of weeks later (in early September), is a pomegranate that has been planted a lot in recent years and of which there are already considerable volumes. It is characterized by being somewhat less sour than the Smith. September is also the time for the arrival of the Valenciana variety, which is very sweet, but with a pale skin, and this lack of color results in some countries not accepting it, even though few pomegranates can compete with it in terms of flavor," says the producer and exporter.

Later they continue with the Wonderful and Mollar de Elche, which are usually harvested in early October. "The Wonderful is a world-renowned variety with a red color, sour flavor and good size. On similar dates, we also start harvesting the Mollar de Elche pomegranate with Protected Designation of Origin; a sweet pomegranate, with reddish tones and edible and priceless arils. Without a doubt, a unique pomegranate." 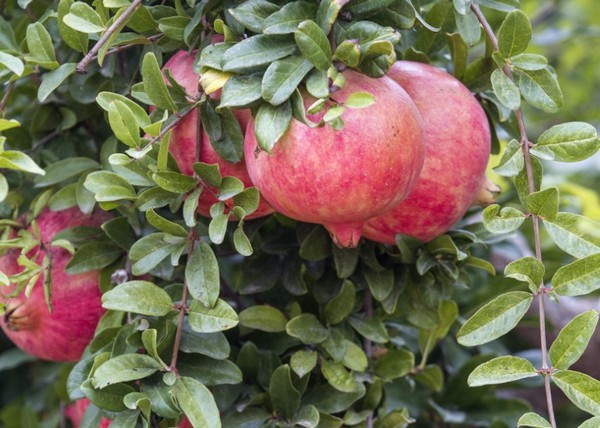 Although the traditional Mollar de Elche has been replaced by varieties such as the Acco and Wonderful, Francisco Mas says that the results have not been as good as expected. "Our company is constantly developing, both in terms of production and handling, always trying to innovate, although not always successful. A few years ago, we started several Acco and Wonderful plantations which we thought could have potential, but we are seeing that they suffer problems that don't affect other pomegranates. Besides, there is great competition from third countries with much lower prices and production costs."

"The trend of pomegranate cultivation in recent years has been to expand, which has caused the fruit's price to fall. In our producing area, we have seen the abandonment of the Mollar due to the price and the lack of generational replacement. However, we expect to continue growing, because the demand from our customers for the products we offer is increasing year after year," says Francisco Mas.

"This year, we are seeing a higher demand for the PDO Mollar de Elche pomegranate, which has a superior and unique quality and is considered a 'superfruit'," he says.

One of the biggest challenges this year, according to the producer and exporter, is the fruit harvest. "The pandemic is breathing behind our necks, and because of it, the harvesting costs have to increase in order to guarantee the safety of our workers; something essential for us," says Francisco Mas.