Young fruit on litchi, mango and avocado trees also at risk of fruit drop and sunburn 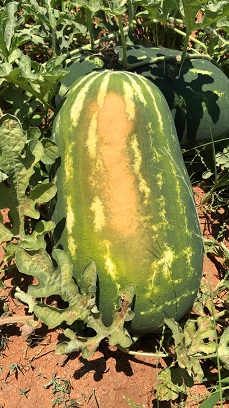 The South African Weather Service has issued a heatwave warning over the interior of South Africa.

It is the first heatwave of the summer; extreme temperatures are expected to abate from tomorrow.

In the far north of South Africa, north of the Soutpansberg Mountains, watermelons have suffered sunburn since the weekend (see photo right).

"The temperatures weren't abnormally high, but the whole of October was colder than usual. Last week it was cold and cloudy, the whole week long, and then suddenly a heatwave arrived, which gave the fruit no time to acclimatize their rinds to the heat. The plants also just wilted in the heat," explains Tinus Venter of Janlouis Boerdery, near Waterpoort, Limpopo.

He measured 44°C yesterday on their farm, which is close to South Africa's borders with Botswana and Zimbabwe, with the same expected today. 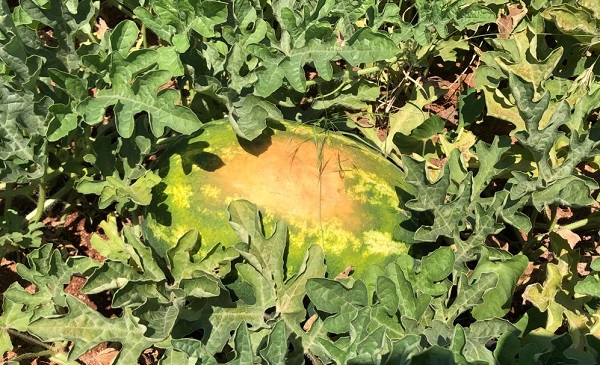 Sunburn on watermelons since the weekend (photos: Tinus Venter)

It's hot but last year it was 10°C hotter still
It's just 38°C on Alicedale Estate, near Musina, says citrus farmer Peter Nicholson.

"It's a hot day, but it's pretty normal for us. It's not abnormally hot for this time of the year."

In the Levubu area, south of the Soutpansberg and origin of South Africa's earliest avocados, farmers are glad it's only 37°C .

Last year this time they had temperatures of 47°C  for several successive days, and the Hass avocado crop was badly affected and sizes were small.

"So the temperatures are actually quite temperate at the moment, and we're very glad for that," says Lizelle Muller, avocado packhouse manager at Amana Boerdery in Levubu. She grew up in the area and she does note that general temperatures in the district have risen over the past few decades.

Heat risk for young subtropical fruit
The high temperatures could pose a risk of fruit drop and sunburn on young litchi and mango fruit, as well as an adverse effect on macadamia pollination.

Fortunately soil moisture levels are higher due to good recent rain over Limpopo; hopefully this will soften the incidence of fruit drop in their avocado orchards, says a Tzaneen avocado farmer.

Letsitele citrus farmers also received significant rain, after straining under drought for years now. "Our soil moisture levels and humidity are still high," explains a grapefruit grower from the area. "High temperatures and a degree of fruit drop this time of the year (November drop) are normal."

"We've experienced much worse over the past six years," he adds.

The heat, after a week of overcast conditions, is welcomed by Limpopo grape growers. They stand on the cusp of a new table grape season and the heat is a boon to sugar accumulation in the berries.