Carsten Darocha (Birkenhof Gemüse) at the start of the new season

On the chicory fields of Birkenhof Gemüse in Köngen, Germany, they have been busy clearing for a good two weeks. After the clearing, the roots are traditionally placed in the darkroom, where they are further cultivated. "In the first week of November, we will then be able to deliver the first newly harvested produce to the food retail trade," confirms Karsten Darocha, sales manager at the chicory producer. 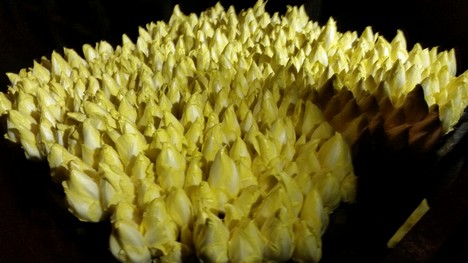 A view into the darkroom

This year's harvest got off to a successful start at the beginning of October, but the increased rainfall meant that clearing conditions deteriorated rapidly. "Last year, the drought somewhat limited the growth of the roots, which is why we had to wait longer before we could start clearing. At the moment it is hardly possible to clear them because of the wetness in the fields." 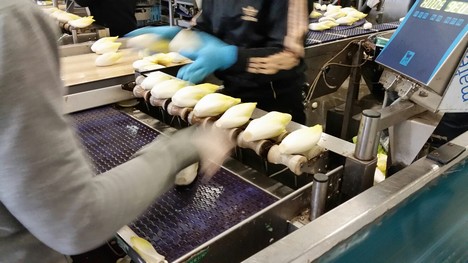 Short supply gap
Nevertheless, the first batches from the new harvest have already been placed in the forcing plant. This forcing process usually takes just under three weeks in total. "Normally we are completely done with the old roots by mid-November at the latest. From the planning stage, the connection to the new harvest this year is exceptionally good," says Darocha. Currently, however, a slight supply shortfall is being felt: "Prices are pleasing, but the volume is lacking. The supply situation is expected to remain tight until week 43, after which the market situation should ease again." 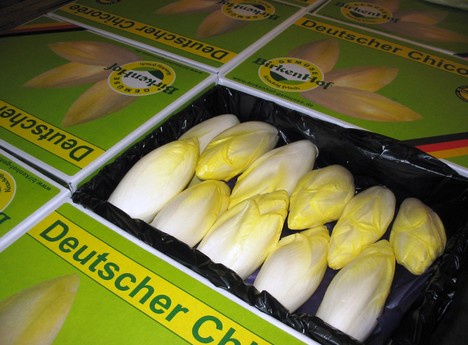 Loose chicory sprouts in 5kg packaging for the wholesale markets.

Stability in price formation
The market prices are already for months good and stable, one assumes that the tendency will remain temporarily also in such a way. Darocha: "We also had to struggle with Corona-related staff shortages in the spring, these additional costs have to be compensated somehow. We see a certain understanding for our situation with all chains, which is reflected in their pricing policy." 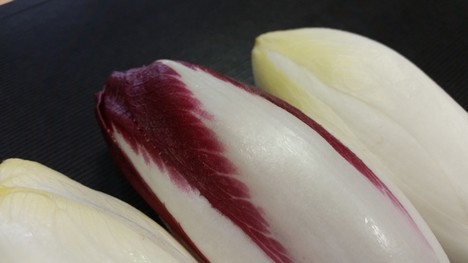 White chicory for the retail trade is the core competence of Birkenhof Gemüse. In addition to this, smaller quantities of red chicory are also on offer. 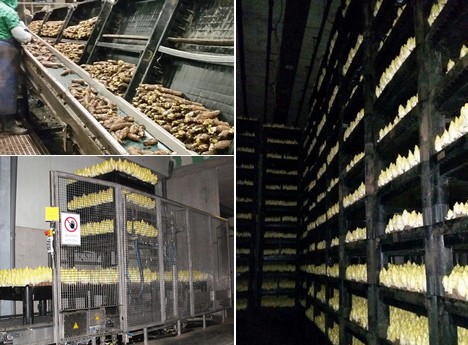 Insight into the chicory forcing plant of Birkenhof Gemüse

High priority in the trade
Birkenhof Gemüse has been dedicated to chicory production for 30 years now. In the first years, the weekly production volume was a maximum of 5 tons, but now sometimes 20 tons of chicory are produced per day. According to Darocha, the company's production capacity has expanded in parallel with the steadily growing demand for domestic produce. "If German retail can get domestic goods, they prefer this." 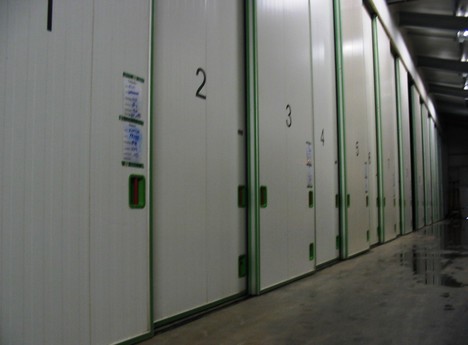 In the darkrooms, the chicory roots are cultivated into a ready-to-sell product.

In recent years, the market has tended towards larger calibers, observes Darocha: "At present, we mainly pack 5-6 pieces in a 500g flowpack, in the past it was mainly 8-9 pieces". The classic peak season for chicory is still concentrated on the cold season, they say. "From now or week 41-42 until Carnival is the most important time of the year for us in terms of marketing. After that, the first greenhouse salads come to the fore again."