UK: Demand for potatoes dropped severely due to restriction uncertainty

The onset of harsher Covid-19 restrictions and concerns over a second lockdown is reportedly depressing demand this week for both the bags and processing sectors.

With weather turning drier across the UK, lifting in many areas has resumed this week in a race to beat any early frost; issues with wetness remain in the West and South, but quality and yields are reportedly good.

As there has reportedly been slow free-buy demand this week, combined with a depressed market, more and more potatoes are being lifted straight into storage.

Packing
Free-buy trade is reported to have been flagging from falling confidence and an overall shaded outlook for future demand as food service slows. Anecdotally, we hear Maris Piper are still achieving a premium; however, due to insufficient quotes, we are unfortunately unable to publish a price.

Bags
Demand has severely dropped this week on the back of uncertainty surrounding possible increasing restrictions and the reluctance of outlets to forward buy. Volumes traded remain low, with price variations due to quality and variety. Premiums are visible for some high value varieties where samples are bold and frying well.

Exports
Export trade to the Canary Islands is flagging this week, with demand both slow and sporadic. Insufficient quotes for King Edwards this week have meant that unfortunately a price could not be published.

August trade data figures released by the HMRC show that fresh sector exports were up 79 percent from July, narrowing the lag in figures behind previous years. This rise in fresh exports accounted for a high proportion of the overall increase in potato exports last month. Whereas imports told a completely different story; overall imports in August fell from July numbers, attributed in most part, to a fall in fresh sector imports.

Exports
In general, the potato export market has seen ‘lift’ over the past month; August figures show an increase in overall exports by 3Kt to a total of 22Kt, of which 86 percent was destined for the EU.

In the processed sector, exports saw a fall by 2.8Kt overall, to a total of 9.1Kt. Frozen exports nearly halved from July 2020 figures to 3.5Kt; yet this figure still sits closely to last year, where August 2019 frozen exports totalled just under 3.7Kt. Whereas, crisped exports saw a small increase of 0.3Kt to 2.4Kt: clearing the previous 5-year average for August of 1.95Kt with ease.

Despite an overall fall in processing exports, a revival in the fresh export trade resulted in increasing August export figures. Fresh exports accounted for 13Kt of August’s figures, of which 12.7Kt headed for the EU with the three main beneficiaries Spain, the Republic of Ireland and Belgium in corresponding order. Nearly doubling on last month, fresh exports still lag figures for August 2019 by 2.7Kt but stand above the 5-year average of 10.6Kt.

As seen in HMRC’s August figures, the EU remains a key importer of UK potato exports in sectors across the board. Crucially, the EU single market is vital to fresh exports. Figure 1 reflects the dependence of the UK fresh produce export trade on the EU, with the percentage of fresh sector exports destined for the EU keeping above 90 percent over the past 3 years. With issues in securing a deal with the EU on exit from the single market, issues in tariffs and phytosanitary regulations will need to be ironed out to keep the trade afloat.

Imports
As seen in the HMRC figures, imports for August 2020 were down 8.8Kt from July, to total 64.8Kt. With maincrop lifting well underway, teamed with decreased demand across the board, there seems to be a reduced appetite for imported potatoes which could provide support for domestic prices in upcoming weeks.

The processed sector imports saw little change in figures for both the crisping and frozen figures. Yet, overall processed imports fell by 2.5Kt to 57.8Kt, lagging behind the 5-year average figure for August of 64.5Kt.

The most prominent change in import figures can be seen through the fresh sector; from July to August, imports of fresh potatoes halved from 13.1Kt to 6.5Kt. Compared to last year, imports are behind by 2.5Kt for August 2020. As touched on briefly already, this could be a result of seeing depressed domestic demand on the back of closing food and retail outlets due to Covid-19 and reluctance to forward buy with the looming talks of further restrictions.

Annually however, a pattern can be seen over the past 5 years through falling imports from July to August as domestic harvest kicks in across the UK. The table below shows how historic potato imports have seen a fall July to August, which may indicate this fall in imports is based on seasonality. 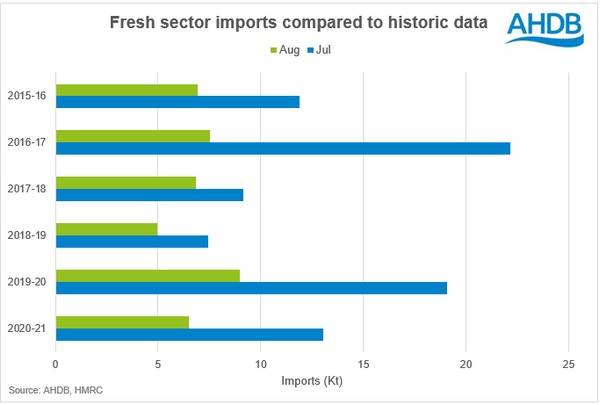