The Spanish company is a leader in the export of fruit and vegetables, with more than 840,000 tons

The Spanish Minister of Agriculture, Luis Planas Puchades, paid a visit to the Anecoop company on October 15. The top managers of the second degree cooperative accompanied the Minister and other authorities in a tour of the farm and the facilities that the entity owns in the municipality of Museros, in Valencia, where it has one of its two R & D & I operations centers. The Minister was informed about the news regarding crops and varieties, and was shown the post-harvest laboratory. 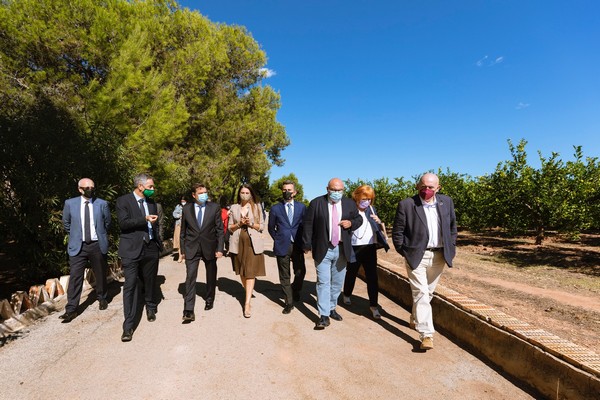 The president of Anecoop, Alejandro Monzón, highly appreciated this visit, and considers it a “show of support for a sector that stands as one of the most powerful in Europe, and which is one of the main engines of the Spanish economy, with a strategic value, strength and independence that are absolutely necessary for our country.”

For his part, the general director of Anecoop, Joan Mir, highlighted the great work carried out by Anecoop to consolidate the supply throughout its 45-year history, which has turned it into "the number one fruit and vegetable company in Spain; a national leader in the export of fruit and vegetables, with more than 840,000 tons sold. It also stands out in Europe for its commitment to research and innovation.”

After the visit to the test field, a meeting was held together with representatives of the Governing Council and the Managing Committee, in which they were able to exchange views on the issues that are giving rise to the greatest concerns in the agri-food sector.