"We were hit by the crisis at a critical time"

In Europe, king trumpet mushrooms are still a novelty, but more and more people are now interested in exotic edible mushrooms. That goes for Germany as well. For the South Korean-Chinese company Mushroom Park, the increasing demand in Europe for the king oyster mushroom - as it is also known - was a reason to take go into Germany. More precisely, they settled in Torgau, in Saxony, where Mushroom Park LLC Germany was founded in April 2015.

For the company, the acquisition of the site was a real stroke of luck, as the infrastructure for the future factory buildings was already in place when the foundation stone was laid. "All the lines had already been laid, which was of course a great advantage for us. In addition, the city of Torgau was very open to us right from the start and gave us really good support throughout the entire process," says Sanghun Kim, sales and quality manager at the Torgau site, in an interview with BDC. The company's goal is to establish itself on the German market and to supply its own products to other European countries in the future. 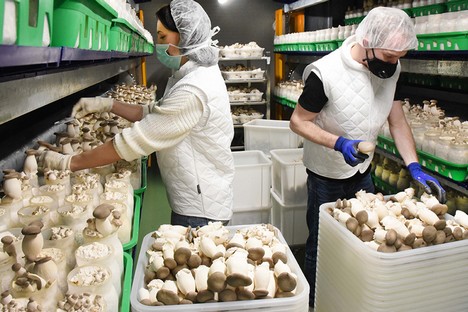 The king trumpet mushroom is the main protagonist in Torgau at this time. "For us it is now important to establish the king trumpet as an edible mushroom here for the first time. If the demand is high enough and things are going well, we would like to add more mushrooms to our range. Which ones will be depends entirely on what Europeans like to eat," says Kim with a smile. The structural preconditions for this have long been in place, as the company currently uses just a quarter of the area that would be possible on the site. For the king trumpet alone, a production volume of around 30 tons per week would be feasible. If the demand is there.

Everything under one roof
The king trumpets from Torgau are produced in a factory hall, which is approximately 6600 m2 in size, extending over two floors. Mushroom Park is extremely self-sufficient, because almost everything, including substrate, is produced in-house. Only the raw materials such as rice bran, grist and wood for the substrate are delivered. The raw materials, water and a special recipe are combined in their own mixers, from which the substrate is finally bottled. The large mixing plants have capacities for about 10,000 growing bottles. In these, the herb seedlings are allowed to grow into large, stately specimens.

To ensure that this works, the mass of mushrooms is regularly thinned out. "We want to produce mushrooms of sufficient quality. That succeeds however only with sufficient place and nutrient offer , stresses the sales manager. The sprouts, which fall victim to the thinning out, do not end up as waste, but are marketed as king trumpet minis. 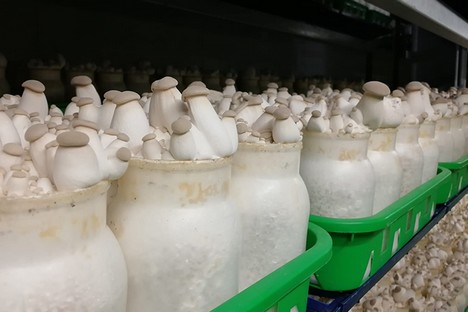 The finished king trumpets are harvested in one go, as is usual with this type of mushroom. "At times we had tried to do a second wave. However, the quality did not meet our requirements, so we finally decided against a second wave," says Sanghun Kim. Currently, 63 employees are at work at the Torgau site, many of whom have been with the company since production started in October 2019. Since the steps leading up to harvesting and the harvest itself are not entirely devoid of surprises for the king trumpet either, intensive training is required. This is done by an employee who has gained experience over four years in a plant in Korea and has mastered every step of production. "But we have foremen in every department who can now instruct their own employees," says Kim.

Corona effects
Since all employees were already hired at the start of production and thus before the pandemic began, the availability of sufficient manpower this year was not a problem for Mushroom Park. "Since all our employees live around Torgau, we didn't have to worry about entry," says the sales manager. Nevertheless, the Corona crisis was a hard test for the young company, especially at the beginning. Because by June, the entire production had to be shut down entirely.

"The crisis hit us at a critical time. As a mushroom producer, it takes a certain amount of time to stabilize production and we were in business for just under four months when Corona hit."

Into the future with organic
In the near future, Mushroom Park plans to achieve organic certification according to European standards. The first pre-audit has already been conducted. However, much depends on the raw materials that the company purchases for substrate production. Not all of them are available in Europe in organic quality, such as rice bran, for example. "We are therefore trying to change our mixture and are always trying out new things. If we are thus able to grow goods of the same quality, we can also have ourselves certified organic. Perhaps one day we will not only be certified according to EU organic standards, but also according to German organic guidelines," Sanghun Kim explains.