The Spanish pomegranate campaign is at its peak, with currently slow sales that could improve with the arrival of the cold. Due to the early end of the overseas season, there was a market gap until the entry into production of the Mediterranean countries, which led to higher prices and good demand, but that has already been left behind. 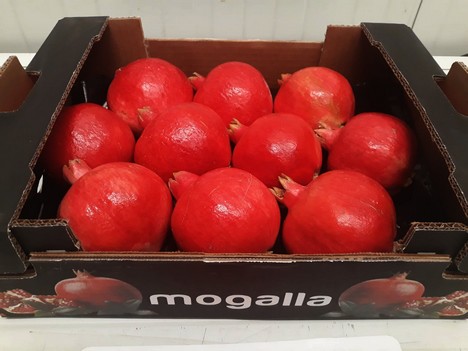 “Producers who started with early varieties, such as the Acco or Emek, which hit the market in mid / late August, got very good prices and good sales, since Europe had had no pomegranates since July and there was a lot of interest in the fruit," says Daniel Blanco, commercial director of Mogalla, which handles and markets pomegranates produced on the various farms that the company owns in the Spanish provinces of Seville, Huelva and Badajoz.

In addition to cultivating the traditional Mollar variety and the red Wonderful variety, Mogalla has also been producing the Acco variety for three years. This year, they have harvested 500,000 kilos, allowing them to start the campaign much earlier and ensuring a continuous supply to their customers from the end of August to December. So far, the demand is slower than last year. During the month of September, consumption has not been very strong due to the high temperatures we've had in Europe. Furthermore, there's also the situation caused by the pandemic, which has resulted in sales to the horeca channel falling to insignificant levels.

As highlighted by Daniel Blanco, the presence of cheap products from other Mediterranean regions, such as Turkey or Egypt, has slowed the market down. “Spain just cannot compete with the production costs of those countries; however, it continues to have a good reputation as a fruit producer and that attracts many customers who appreciate that and prefer to buy Spanish pomegranates, even if they are more expensive than the products from other origins,” he says. “Thus, we want to promote Spain as a supplier. We have been guaranteeing quality, waste control and food safety for many years. That is our strength.”

Regarding the varieties that Mogalla is currently marketing, there has been a significant drop in the production of the Mollar. “This year, there has been a considerable lack of Mollar pomegranates. The production has dropped by around 30-35%, and sizes are also smaller. The market usually demands only large sizes, namely 10-12 (20-24 in 9 kg), but this year, if they want Mollar, they will have to accept smaller sizes, because there is no other option. The Wonderful variety is arriving with good calibers, but also with a slightly lower production compared to last year," says Daniel Blanco.

Mogalla expects to obtain about 1,000 tons of Wonderful and over 1,200 tons of Mollar pomegranates. The company will supply its fruit until mid-December in various European markets, including the United Kingdom, Germany, the Netherlands, France, Italy or Switzerland, as well as overseas destinations, such as Canada and the Middle East.

There are still good prospects ahead for the pomegranate campaign, according to the commercial director. “The weather is getting colder, which is good for the fruit's consumption. Also, it seems that the pandemic has changed the shopping habits of consumers, who are looking for quality products with a high vitamin content that can help them stay healthy. Therefore, the prospect is that the consumption of pomegranates, a "superfruit" in this sense, will increase just as the demand for oranges or lemons did. Pomegranates are not yet a popular fruit among consumers, so there is still room for consumption to grow."

Next week, the Andalusian company will also start marketing the first kakis of the campaign, also affected by a significant drop in the production volume, especially in the Levant, where the presence of the Mycosphaerella fungus is increasingly detected. "Hopefully, this decline in the supply will help us obtain decent kaki prices this season."