Iceberg lettuce came in primarily from Germany. Dutch shipments supplemented the market. In Hamburg, the first Spanish shipments appeared, which were turned over at €6.50 per 10-carton, being somewhat cheaper than the local ones. In Berlin, Polish products at €6 to €8 per 6-piece carton sold briskly. In general, the demand could be satisfied without any problems. Prices mostly remained constant, only climbing in Munich. In Berlin, domestic goods sometimes left a lot to be desired, quality-wise. 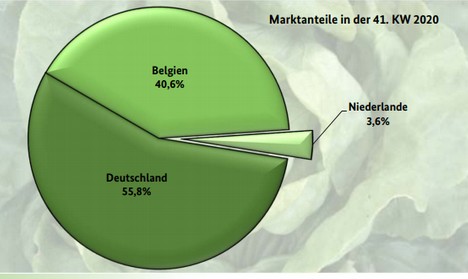 Regarding lettuces, Germany dominated the market, followed by Belgium and the Netherlands. Sales possibilities had been limited, but deliveries were limited as well. Prices often remained at their previous level. Locally, slight price increases were established due to the reduced supply. Belgian batches arrived in Frankfurt at €6.50 per 8-piece box. In Munich, prices increased, based on reduced availability. Interest in German lamb's lettuce increased in Frankfurt.

Apples
As usual at this time of the season, there were local dumpings. The supply increased and exceeded the demand. As a result, traders had to lower their prices from time to time, which was the only way to ensure smooth sales.

Pears
Italy dominated with Abate Fetel, Santa Maria and Williams Christ. The demand could generally be met without difficulty. The turnover rates increased.

Table grapes
The availability was expanding. Seedless fruits were the most popular. This is why Turkish imports in particular had a good chance for quick sales.

Plums
The season was nearing its end, as both supply and demand decreased noticeably. The quality often left a lot to be desired; the domestic products in particular suffered from organoleptic defects.

Lemons
The supply situation grew, and Turkish imports increased: they were now increasingly offered in 14.5 kg wooden crates, in addition to the already established 9.5 and 10 kg crates.

Bananas
A relatively good adjustment of the inflow from the ripening plants to the sales possibilities made for reasonably constant prices.

Cauliflower
Local batches dominated the market. Supply was obviously limited. The demand however, remained friendly or improved due to the bad weather.

Cucumbers
As for snake cucumbers; Spain now dominated the scene. Dutch, Belgian and domestic goods completed the range. Prices tended to go up, sometimes quite conspicuously.

Tomatoes
There was some movement in the assortment as Moroccan, Spanish and Turkish volumes increased. Overall, they had quite good sales opportunities, as they were cheaper than the established Belgian and Dutch offers.

Sweet peppers
In the meantime, Spanish deliveries formed the foundation of the range of products. The availability increased, especially the arrivals from Spain, which were sold in various packaging units.