A newly formed tropical fruit online retail company in Sydney is discovering a huge gap in the Australian market for Southeast Asian produce for the growing migrant population, who widely consume the fruits.

The Thorny Fruit Co is based in Sydney, with the aim of connecting and educating households and food businesses with durian and other Australian exotic, tropical produce. The founder, Zona Tan-Sheppard, also a digital marketing professional, is finding that demand hugely outstrips supply when it comes to most of these unique fruits.

"Being an online business, I encounter many people who are surprised to find that this tropical produce is actually grown here in Australia," she said. "I receive messages from all around the country repeatedly demanding for fresh tropical produce like calamansi, duku langsat, cempedak, soursop, and petai - but I often don't have enough or any at all. It is frustrating.” 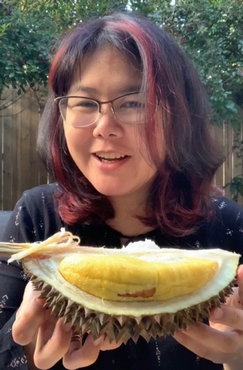 As a digital marketer, The Thorny Fruit Co also focuses on building a database of Australian subscribers who want to be notified when specific produce is in stock or in season. This helps Ms Tan-Sheppard gauge the increasing demand with quantifiable data and Google search results - not mere hearsay.

“I started The Thorny Fruit Co about 20 months ago, after having discovered Australian durians," she said. "I was part of a community Facebook group who were fascinated with the fact Darwin had been growing Malaysian seedling durians since the 1990s. I eventually became friends with the durian farmer, Han Shiong Siah of Tropical Primary Products, who taught me a lot about his family’s HEW1 durian and other Malaysian seedlings. I hit the ground running and taught myself how to purchase TPP’s durians wholesale at Sydney Markets. At first, I thought I would buy one 20kg box for friends and the immediate community. But word got out, and I ended up purchasing 400kg.”

In creating the business, there was a huge education process in getting many Southeast Asian migrants to understand that whilst Australia grows many familiar tropical produce, there was a difference in cultivars due to climate and viability in the Northern Australia region. Often these cultivars end up tasting better, and are sometimes larger in size, than those grown in The Thorny Fruit Co customers' home country.

“I find myself asking plenty of questions and learning from the tropical fruit farmers, who are on social media. The most frustrating story to hear was from a petai (bitter bean) and cempedak grower telling me that their wholesale agent had advised them to stop growing and sending them south because there was no market for them. That's wrong! On initial interest, I had over 50kg pre-orders of petai from Sydney household customers who wanted the petai fresh and not frozen imported from Thailand. They explained to me that the texture and taste do not compare. Not to mention I know at least five Malaysian restaurants and some Indonesian restaurants that will buy them fresh if Australia has a constant supply. There was certainly an opportunity for cempedak fritters served as desserts in the restaurants. When I sold cempedak through my website, I was getting the grower $12/kg instead of the $2/kg he received from his agent 5 years ago. There's a huge gap here." 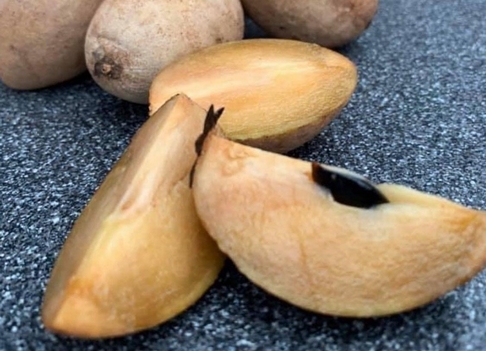 One fruit in red-hot demand in recent weeks is the Sapodilla. With only very small quantities grown in Australia, wholesalers and retailers are competing for whatever supply they can get their hands on. Ms Tan-Sheppard says she had waited almost 2 years to get her hands on the tropical fruit for her customers.

“I eventually found my supply from a farmer, who didn't go through Sydney Markets, which explains why I hadn't seen any there before," Ms Tan-Sheppard said. "He told me he could only spare 9kg at the time. When I sold out online in less than 2 hours, I asked him for more, and luckily he had another unsold box. So, I added another 9kg on my website, and it also sold very fast.”

She added that what makes the tropical produce on her website so popular, is that it brings back familiar flavours and childhood memories of her customers’ home country.

“Many tropical fruits have complex flavours. Often being more fragrant and versatile in both sweet and savoury dishes, or eaten fresh with condiments like bagoong or preserved plum salt," Ms Tan-Sheppard said. "The strong aromatic notes of an Asian green eating mango, or the pungency of a durian trigger happier times of communal or familial celebrations for many Southeast Asian migrants.”

The Sapodilla, known botanically as Manilkara zapota, is native to Central America, and is known by many other names around the world - Ciku, Chico, Chikoo, Sapote, and Sawo. The Thorny Fruit Co says it tries to include the many local SEA names for each fruit, to help cater for the culture and language barriers.

"To Malaysian migrants, it is known as Ciku," she said. "I was born and raised Malaysian, but I have Filipino blood - so even my Filipino followers on Instagram went crazy when I featured the chiko. I even offloaded some to a Filipino pâtissier in Melbourne, who wanted to make sorbetes (Filipino street ice-cream) out of it. The sapodilla is so much different from any other fruit; it has the graininess of a pear, the tenderness of a mango, although more fibrous and a honey-caramel sweetness to the fruit. In Malaysia, we usually eat it fresh, whilst Filipinos would use it in ice cream or a fruit shake." 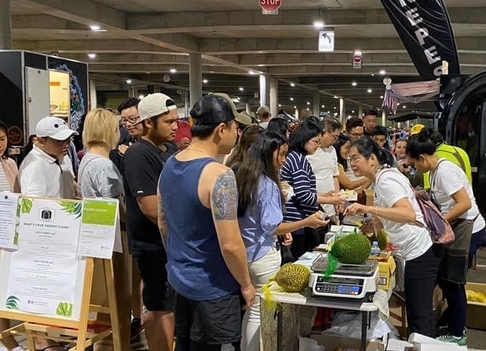 A major seller for The Thorny Fruit Co is the durian, the company’s namesake. Ms Tan-Sheppard admits that while it is a very divisive fruit, where consumers really love the flavour, or they hate it, demand in Australia over the past 5 years has increased.

Since starting The Thorny Fruit Co, she has pushed her suppliers to make more varieties other than the Musang King available on the market. Acknowledging that the durian will always be a premium fruit in Australia, she makes it a point to help educate her followers and customers about the difference in flavour each durian variety.

"Before I started in the market, I was only aware there were durians in Australia the past 3-4 years," Ms Tan-Sheppard said.

Malaysia has picked up export to Australia. With demand so high in China, she says the price of durians averaging $30/kg is also reflective of Australia’s rising demand against China for frozen Malaysian Musang King durians. She says we often have our prices driven up because we are bidding against China for the high-quality, good-sized fruit.

“When I began The Thorny Fruit Co, it was mainly because I found my fellow migrant Malaysian community were disappointed with local retailers mislabelling the D24, Thai or Vietnamese durians as Musang King," Ms Tan-Sheppard said. "One bin of durians could be advertised at premium Musang King prices, but contained fresh Australian durian sitting aside thawed out frozen imported fruit from Thailand or Vietnam."

Having grown up in Malaysia, and understanding how different durian clones had distinct sweet or strong bitter characteristics, Ms Tan-Sheppard didn’t think this was fair for the consumer.

“You could end up paying $60 for a 2kg durian, expecting the golden pulp with the balanced creamy bitter-sweetness of a tree-dropped Musang King - then arriving home disappointed when it is actually a crunchy, tree-harvested Thai durian," Ms Tan-Sheppard said. "Just as you’d expect to distinguish a Royal Gala apple from a Fuji apple - every durian variety has its own name and unique flavour. There is a durian for everyone's taste preference; there's a sweet one, a bitter one, and ones in between. That's where I found an opportunity to educate people, and The Thorny Fruit Co became a market educator of sorts. As durians are a premium fruit, circa $20-30 per kilogram depending on the variety. If consumers can arm themselves with knowledge, it does a service to the industry as a whole. Rather than rely on a grocer, who isn't knowledgeable or doesn't label the premium fruit appropriately. When the customer has a negative experience, they end up writing-off the durian. That's where my business aims to step in as a specialist in the exotic fruit sector." 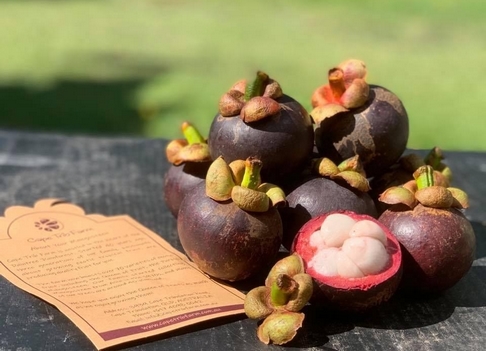 Summer is peak season for The Thorny Fruit Co, which is hoping for another strong year of Queensland Mangosteens. Last year the fruit stayed in season until June, but Ms Tan-Sheppard admits the late pruning could possibly mean that there would be a gap in supply this year. There were also some great quality Rambutans from Darwin, NT last season.

"I discovered the grower is actually a dentist by profession. It was lovely and amusing; it's like his way of selling nature’s candy as opposed to the bad for your teeth confectionery sweets," she said. "Another fruit I would love to advise farmers that are in high demand among The Thorny Fruit Co customers is the duku langsat/longkong - also known as the lansones among the Filipinos. I only had about 20 kilograms but I was getting requests all year round from all over Australia. The only problem was I couldn't post rural or interstate, either due to biosecurity issues, or the fact that the langsat would spoil in transit. They have already spent 2-3 days travelling south from North Queensland. I soon discovered from the wholesale agent whom I purchased from that the langsat was scarce because the grower only had two trees, which takes nine years to fruit. And being in North Queensland, once the cyclone season hits, that is it." 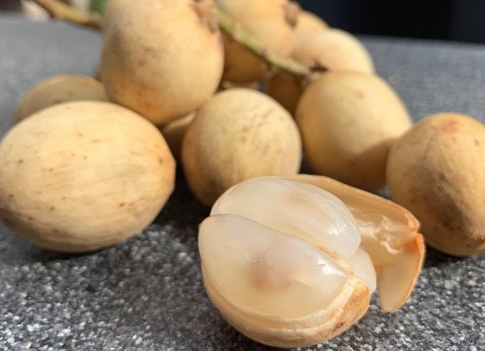 Another new fruit that The Thorny Fruit Co is selling is the Fiji Longan also known as Matoa, which is grown in the Daintree region of Far-North Queensland. Last summer, the company sold all 20 kilograms that it was supplied directly from a grower.

"It’s quite a delightful fruit. The shell was hard, so it made them shelf-stable and great for shipping, compared to longans and lychees, where the skin is thin and sensitive," Ms Tan-Sheppard said. "It has a nice bite and sweetness, so I was wondering why it hasn't picked up more widely, yet. Another commercially viable fruit in high demand is the Calamansi. The tiny fragrant, sweet-sour citrus common to the Philippines, Malaysia and Indonesia, is often mistaken for kumquats. The ones that I have found in Sydney Markets are overripe and orange. The growers have picked them too late, and they are too orange.” 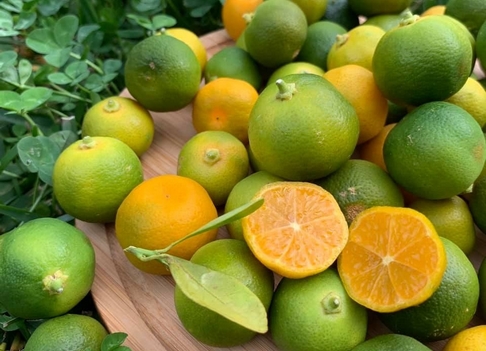 Ms Tan-Sheppard receives weekly requests from Malaysian, Indonesian and Filipino restaurants, patissiers and caterers who love and use them green, or yellow-green.

“They have a great aromatic fragrance to them, and back in Southeast Asia, they’re served extensively as a condiment in sambal, rice or noodle dishes. Even as a refreshing drink in iced tea or healthy calamansi juice,” she said. “Teh O’Ais Limau (calamansi iced tea) was one of my favourite drinks to cool down in the back in Malaysia.”

There is a huge market opportunity, especially for Australian citrus growers who can get hold of disease-free scions or seedlings. In wholesale quantities, they have been sold for $10-15 per kilogram, and it can be available all year round as there is a harvest cycle of 6 weeks to 3 months when grown in the right environment.