In Perroy (VD), fenaco Landesprodukte put a new cold store for pome and stone fruit into operation at the beginning of September. The modern facility can hold up to 2,750 tons of fruit and makes an important contribution to the year-round availability of local apples and pears. In effect, fenaco is investing in the Swiss agricultural and food industry and is further expanding its presence in the important production area of La Côte. 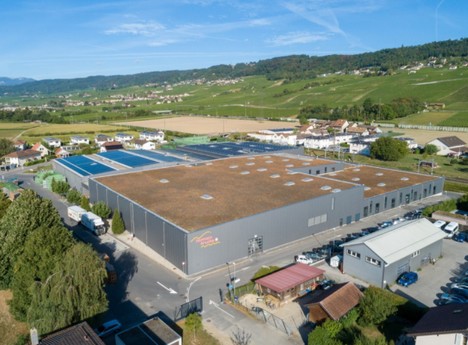 Léman Fruits, a production site of fenaco Landesprodukte, markets around 12,000 tons of pome and stone fruit annually and has storage capacity of 10,000 tons. The demand for local fruit is developing positively from year to year. In order to meet consumers' demand for healthy, safe and sustainable Swiss food, fenaco Landesprodukte has decided to expand its capacities for storing pome and stone fruit.

"With this investment in the Swiss agricultural and food industry, we are making an important contribution to the year-round supply of the population with local fruit and are further expanding our presence in the important production area of La Côte," says Christian Bertholet, Category Manager Fruits at fenaco Landesprodukte.

Longer storage thanks to new technology
Up to 2750 tons of fruit can now be stored on an area of 2380 m². The building is adjacent to the existing refrigerated warehouses and has 21 cold rooms with so-called 'Dynamic Controlled Atmosphere' technology. This allows the oxygen level to be set even lower than with the previous technology. This enables longer storage without reducing the quality.

"Metaphorically speaking, we put the apples and pears in hibernation. This keeps the fruit crisp and fresh until it is sold in the spring, offering a unique taste experience," says Vincent Dornier, head of the Perroy site.

Solar power covers 23 percent of the power requirement
Together with the expansion of the storage capacity, the photovoltaic system was also expanded. With a total area of 3,930 m2 and an annual output of around 640,000 kilowatt hours, around 23 percent of the electricity requirement will be covered by the company's own production in future. The remaining electricity requirement will be supplemented 100 percent with electricity from Swiss hydroelectric power - as is the case at all other fenaco national product locations.

In addition, the existing lighting in all Léman Fruits buildings was replaced by LED lamps. With annual savings of 96,000 kilowatt hours, this measure contributes to the goal of significantly increasing energy efficiency.