Heavy rainfall across most of the country last weekend halted lifting for most growers at the start of the week. Continued pressure from lockdown uncertainty hampers trade in both the bags and processing sectors. By and large prices have remained stable on the week but remain below prices this time last year with the exception of Scottish Maris Piper.

Packing
Packing trade is quiet this week, with contracts utilised to cover demand. Some small volumes of whites are moving as top-ups, but this is not required in any great volumes. Maris Piper remains as the dominant variety, but even this is less sought after this week and volumes slightly reduced from last week. English packing whites prices are up to £60/t less than the same time last year, with Scottish whites at a similar discount too.

Bags
The bags sector has felt the pinch further this week, with prices relatively stable but at reduced volumes. Traded volumes are generally very low and maintain as repeat orders only. The wet weather, coupled with uncertainty about local lockdown measures, has had a knock on effect on demand at fish and chip shops. Much of the bag trade is described as “hand-to-mouth” purchasing.

Shop owners are nervous of sitting on too much stock in case of increased lockdown measures being introduced, resulting in a further reduction in trade. Compared to the same time last year, East and West chipping material prices are up to £30/t down and volumes are described as back on the year too.

Processing
Processing demand continues to be under pressure from the uncertainty surrounding the foodservice sector in the coming weeks.
Contracted material is covering the bulk of demand. That said, we have received more quotes for free-buy processing material this week, although in small volumes. Free-buy peeling material is cheaper than the same time last year, when the median price for Maris Piper was £85/t.

Exports
Export trade to the Canary Islands continues this week. Better demand is seen for some with premiums for King Edwards being paid over other whites varieties. The increased lockdown measures in Ireland have reduced trade this week to very minimal levels.

Planted Area per region and sector 2020
The 2020 GB planted potato area is one of the lowest on record seeing a 2.3% year-on-year drop. The total 2020 planted GB area (revised estimate) is 117.47Kha. This updated estimate indicates a drop in planted area of 2.3% compared to last year and represents the GB area covered by over 90% of producers. This puts the planted area for 2020 as the third smallest on record, behind only 2016 and 2017. The driving force behind the drop is mainly the processing sector, but also the fresh bags sector with a combined reduction of 4.1Kha.

Since the estimate based on 80% of growers, some larger growers have submitted their planted areas showing they have dropped their area more significantly than many of the earlier submissions. This has caused a larger drop than usual and highlights that with 10% of submissions still outstanding we could see some further changes to these estimates.

Other regions that have recorded only marginal (<2%) year-on-year changes to planted area include Yorks & Humber, South West and Scotland.

There has been some significant drops in planted areas in regions badly hit by the weather events of both 2018 and 2019. A drop in planted area of 1.1Kha is estimated for the North West, a region particularly effected by the wet weather experienced in 2019. By 12 November 2019, 33% of the North West’s crop was estimated to still be in the ground and the rain continued right through the winter causing continued problems.

The potato area in the North West has been declining quite dramatically since a peak in 2017. A key driver behind the drop in planted area for the North East and North West combined comes from the processing sector; a reduction of 574ha (22.6%) from last year.

Other regions with cuts of 700-800ha to planted area include the East & West Midlands. Both these regions have been following a long-term trend of reduced area year-on-year. Since 2011 plantings, the East and West Midlands have seen a reduction of 1.4Kha and 3.4Kha respectively.

GB planted area by sector
Despite the total GB planted area being 2.3% lower year-on-year, there are some greater changes on a sector level. The area planted with the fresh bags market in mind, generally for wholesale or farm shops, has seen a drop of 22.8% compared to last season, at 4.7Kha. However, this is one of the smallest sectors in potato plantings.

Potatoes intended for the pre-pack and processing sectors remain the largest area by some distance, making up 67.4% of the total planted area when combined. The biggest sector, pre-pack, at an estimated planted area of 44.32Kha, saw a rise of 698ha (+1.6%) compared to 2019. This is not a surprise given the strong retail performance of fresh potatoes in supermarkets at the time of planting contrasting the lower foodservice demand. 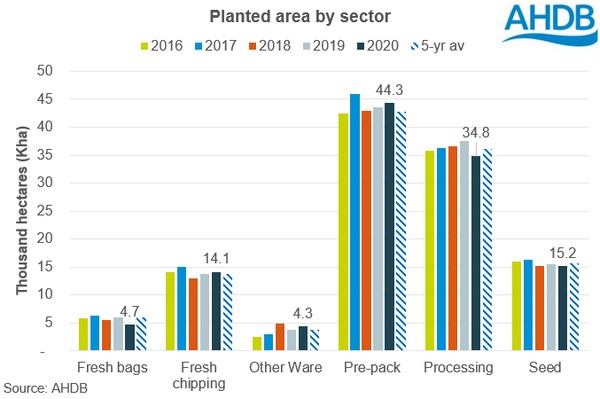 The processing area, on the other hand, has experienced a cut to planted area. With an estimated 34.8Kha planted with the intention of reaching processing markets, that’s a drop of 7.1% (2.7Kha) year-on-year. When compared to the 5-year average processing area, this is a lesser drop of 3.6%. Processors have been hit badly by the coronavirus outbreak wiping out huge chunks of the foodservice sector so this is not hugely surprising to see.