Since the COVID-19 pandemic, a leading international technology company has experienced an increase of 24 per cent in the use of its cleaning robots in retail stores, warehouses and distribution centres.

"When it first hit, everyone was focused on getting products into the store, and making people feel safe," Mr Spruijt said. "There was a noticeable spike in interest in automated cleaning with many retail contacts wanting to understand how we could fit into their environment. Next year, we will definitely see a big rise in retailers fully adopting robotic cleaning. We also see a lot of interest from logistics; warehouses and distribution sites, which are our two big sectors today that are most connected with a lot of automation."

Based in San Diego and with a European office in Amsterdam, Brain Corp works with Original Equipment Manufacturer (OEMs) from around the world to create autonomous versions of their cleaning machines. Brain Corp-powered robots have already covered over four billion square metres autonomously, according to Mr Spruijt, with over 90 per cent involved in the retail industry.

"Brain Corp’s BrainOS® technology is an AI platform for autonomous mobile robots, which means that we do software, not hardware," Mr Spruijt said. "We work with major OEM suppliers in the market and we help them robotise their fleet. Our software is always the same, so we want to give customers a platform, so they can pick which OEM they want. Right now, we have 14,000 robots enabled in the field." 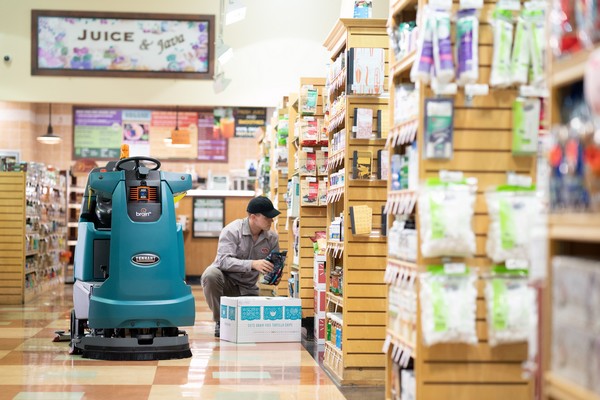 A Brain-OS powered scrubber from Tennant

Mr Spruijt adds that while Brain Corp is now primarily powering cleaning robots, they have also announced partnerships with OEMs in the automated delivery space and are also involved in shelf-scanning applications.

"The robots drive through the aisles and scan the shelves to see whether product is available or is on the right shelf," he said. "If a shelf is empty, that's a big thing for retailers. In terms of cleaning, normally, you would sit on a ride-on scrubber in the store and just clean the store after hours. Today, we have seen customers integrate cleaning while the public is in the store, because they want to show they are clean. The advantage of an autonomous machine is that usually someone would be driving it, but you can actually teach the machine what to clean and leave it to work. So, the first time an operator will sit on the machine and show it what it needs to do, and after that you can automatically let it do it itself. It is able to work autonomously in dynamic environments, allowing staff to focus on higher-value tasks."

Mr Spruijt says the robots are cloud-connected, so customers can easily access fleet-wide metrics via an online dashboard. Users can see how much the time the machines have been run in autonomous mode compared to manual mode and what routes they have taken. These stats can be leveraged to increase operational efficiencies throughout the environment. This is especially important in warehouses that change the dynamics every day, depending on the storage space utilised by pallets, compared to empty floors. 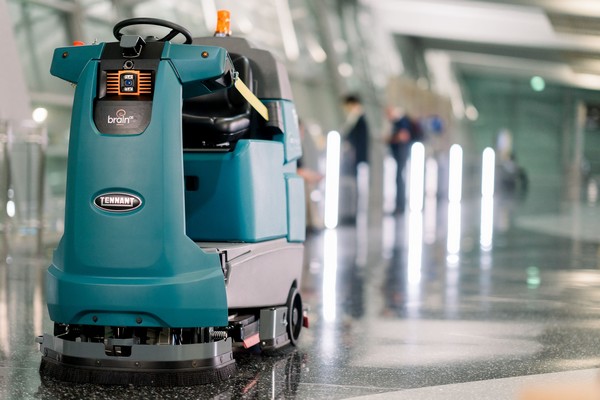 "We suggest training the robot when the floor is as empty as possible, so you cover everything," he said. "The machine is integrated with a collection of specialized sensors. These work in combination with our software, allowing BrainOS-powered robots to see the difference between a dynamic (eg. person), or static object. If an item moves, even a metre, it will clean where it was before, and go around the new location. However, there is another option if the machine can't go around an object; it will just stop, and call for an assist. The end-user will get a notification on their phone that the machine has stopped and is in need of help. "

This ability to switch easily between autonomous and manual operation is incredibly important in solving immediate problems, for example liquid spills, which need to be cleaned quickly, instead of wasting time programming the machine first. Mr Spruijt is confident that the public understands the purpose of cleaning robots and aren’t intimidated by their presence in stores.

He adds that the machines are all artificial intelligence (AI) driven, and learning how to operate the machines takes between 5-10 minutes. The software is updated almost every month, so the robots keep advancing, with the aim of becoming more efficient and productive.

"For example, in the beginning, people were training long routes, because they didn't want to restart the machine all the time," Mr Spruijt said. "What we learnt from that was that we needed to create a feature that is called consecutive routes; what that means is that you can train smaller routes and choose different routes on different days. Otherwise it can run all routes consecutively. We are constantly listening to what our customers want and are able to adapt and update as we go."