This past Friday evening Hurricane Delta made landfall in southwest Louisiana as a Category 2 hurricane and sustaining 100 mph winds. While spinning north over land, Delta quickly weakened into a Post-Tropical Cyclone. Just six weeks ago, the same area was impacted by Hurricane Laura. Although the damage from Delta was less severe, the storm had an expansive wind field and flooding surpassed Laura’s. From Louisiana, Delta moved over Mississippi and its remnants dumped heavy rain on parts of Georgia, the Carolinas and Virginia. According to the National Hurricane Center it brought about 1-4 inches of rain to the (south) eastern states. 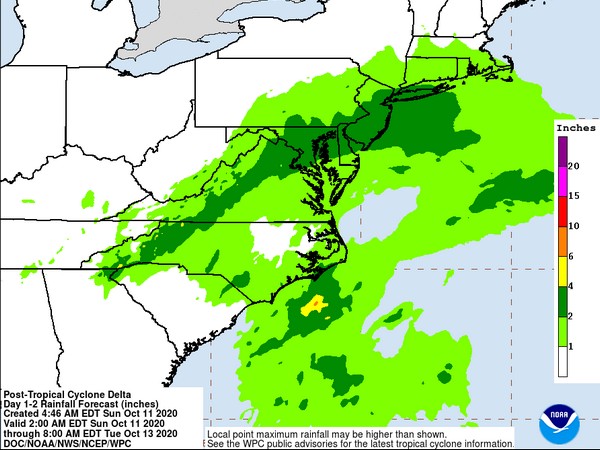 Sweet potatoes Louisiana
Garber Farms in Louisiana has been able to continue packing sweet potatoes off of generator power. "We are prepared for events like these," Matt Garber said. "However, behind the scenes many hours of preparation and clean-up went into this instead of doing normal business, making this hurricane very costly." There was no major structural damage and Garber expects crop damage to be very minimal. "Nevertheless, it will take another week or two before we know for sure." Most importantly, Garber's family and crew are all okay.

Mississippi
On Friday, before Hurricane Delta made landfall, FreshPlaza reached out to the Mississippi Sweet Potato Council to ask about the potential impact of Hurricane Delta. “We will be impacted, but hopefully not too much,” Sylvia Clark with the Council said. By Friday late afternoon, the majority of sweet potato acreage in the state had received only 1.-1.5 inches of rain. “The prediction is that the storm will travel north along the counties that border the Mississippi River and then turns right. The main sweet potato producing counties in north Mississippi hopefully will miss most of the rain. We won’t know the full impact until after the weekend,” Clark added.

“Any rain will slow the digging process, which is challenging as we approach mid-October. We usually try to complete harvesting by mid-November. Our hope now is a delay in the arrival of cooler weather and cold soil temperatures.”

Delta was the fifth hurricane that made landfall in the US this year and the 10th named storm of an unprecedented Atlantic hurricane season. According to Phil Klotzbach, Colorado State University researcher, a record set in 1916 was broken this year.