"We will achieve a considerable increase in volume this year"

This year's apple harvest in the South Tyrol growing region is in its second half right now. The first batches of Galas were harvested at the beginning of August, and within the next four weeks the last late varieties -such as Pink Lady- will be ready for picking. The first forecasts for the Cooperative Biosüdtirol are particularly positive, says Managing Director Werner Castiglioni.

In recent years, some farmers have converted their farms to organic cultivation. This year, 50 farmers have joined Biosüdtirol, which means that the area under cultivation in Biosüdtirol has increased from 650 to about 800 hectares compared to last year. "Accordingly, the increase in area will lead to a considerable increase in volume. We expect to increase our total yield from 28,000 tons last year to 35 to 36,000 tons. In contrast to last year's season - in which we had a relatively large amount of small-caliber produce - this year we are seeing rather a nice fruit size in line with market requirements," says Castiglioni. 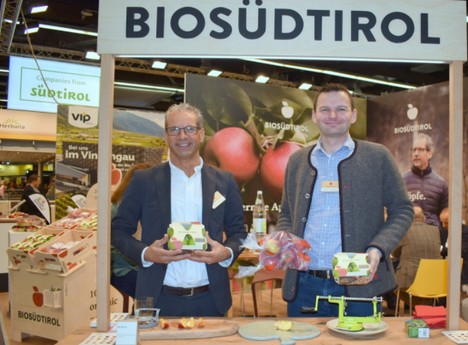 The first new product of the season came across a virtually empty market with no remaining stocks and relatively few supplies from overseas. Currently, the marketing situation is quite stable with a sumptuous supply situation and a high degree of self-sufficiency. "Parallel to the yields from European commercial fruit growing, there is traditionally a lot of fallen fruit from own home gardens until mid-October. Nevertheless, organic pome fruit is well received on the markets. "Especially in these times of Corona, health awareness among consumers seems to be increasing, which is why organic fruit is coming to the fore even more."

Continuous development of the range of varieties
Biosüdtirol focuses mainly on supplying foreign markets, with about 90 percent of its earnings ultimately going to exports. Germany has always been one of the most important markets for the South Tyrolean pome fruit industry. Castiglioni: "Our Gala apples are still strongly represented on the German market, and Pink Lady has also been able to establish itself rapidly in recent years."

Nevertheless, we are constantly working on new varieties and market concepts. Among the latest variety innovations of the cooperative are Natyra, Story Inored and Bonita. "Taste as well as shelf life are the key to ultimate market success. In recent years, we have increasingly set ourselves the task of expanding our range of varieties for late marketing in the summer months, thus ensuring a seamless transition to the new harvest." 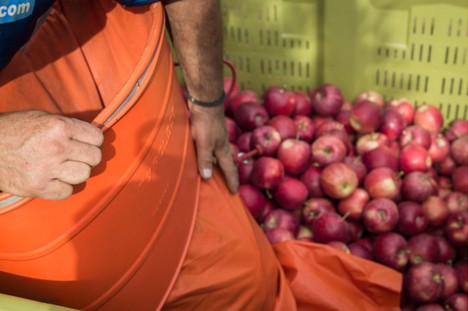 There is a particular growth potential for late marketing from May to July, and in the coming years, the range of varieties will be expanded with tasty varieties for this period. "At the beginning of the new year we will again present three new registrations," Castiglioni states.

Cardboard trays & home compostable bags
Parallel to the selection of varieties, the cooperative is also working on a future-oriented and competitive packaging strategy. "The small packages for four apples made of 100 percent cardboard - a cardboard sleeve protects the apples in the cardboard tray - have now become established in international trade and are also well received by consumers. Starting this year, we have also been offering home compostable bags in 500 gram and 1 kg sizes as an alternative. These are primarily intended for packaging the smaller calibers."