Meth found in the back of a tractor trailer

U.S. Customs and Border Protection, Office of Field Operations officers at the Port of Nogales’ Commercial Facility seized methamphetamine and fentanyl on Friday from a Mexican National when he attempted to enter the United States. The seizure is the largest methamphetamine load in Arizona’s port history.

CBP Officers discovered nearly 650 packages of drugs concealed within a non-factory floor compartment of a tractor-trailer that was laden with bell peppers, pickles and cucumbers driven by a 58-year-old male. CBP officers conducted a thorough inspection and noticed anomalies throughout the floor of the trailer, which resulted in the seizure of approximately 800 pounds of methamphetamine and 9 pounds of fentanyl with a value of nearly $2 Million.

Area Port Director Michael Humphries commended his staff at the Nogales Mariposa Cargo Facility for this record-breaking drug seizure. “This is an enormous amount of very dangerous hard narcotics that Nogales Cargo Officers prevented from reaching communities throughout the United States.” 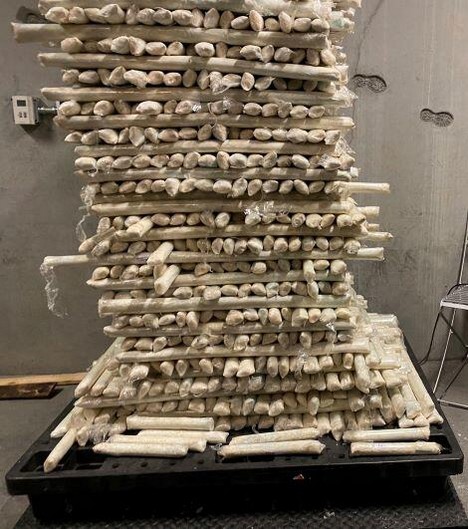 Officers discovered meth in the back of a tractor trailer

This is the second drug seizure of this magnitude in less than three months.

Federal law allows officers to charge individuals by complaint, a method that allows the filing of charges for criminal activity without inferring guilt. An individual is presumed innocent unless and until competent evidence is presented to a jury that establishes guilt beyond a reasonable doubt.