Satellite data reveals variability in intensity of groundwater use for different crops, a boon for irrigation policymaking across the state
Researchers at the University of California San Diego report in a new study a way to improve groundwater monitoring by using a remote sensing technology (known as InSAR), in conjunction with climate and land cover data, to bridge gaps in the understanding of sustainable groundwater in California’s San Joaquin Valley.

Their work could be revolutionary for managing groundwater use in agricultural regions around the world, as groundwater monitoring and management have been notoriously difficult to carry out due to lack of reliable data.

The satellite-based InSAR (interferometric synthetic aperture radar) is used to make high-resolution maps of land surface motion in space and time, including measurement of subsidence (or sinking). Subsidence can occur when large amounts of groundwater are removed from underground stores, called aquifers.

The study, published in the journal Environmental Research Letters, took advantage of the incredibly fine-scale resolution of InSAR to evaluate subsidence patterns according to crop type, revealing surprising results. For example, despite reports of high water consumption by fruit and nut crops in California, the crop types with the greatest rates of subsidence, and by association the greatest rates of groundwater use, were field crops such as corn and soy, followed by pasture crops like alfalfa, truck crops like tomatoes, and lastly, fruit and nut crops like almonds and grapes.

“Our initial hypothesis was that fruit and nut crops would be associated with some of the highest rates of subsidence, but we found the opposite,” said study lead author Morgan Levy, an assistant professor with a joint appointment with UC San Diego’s Scripps Institution of Oceanography and School of Global Policy and Strategy. 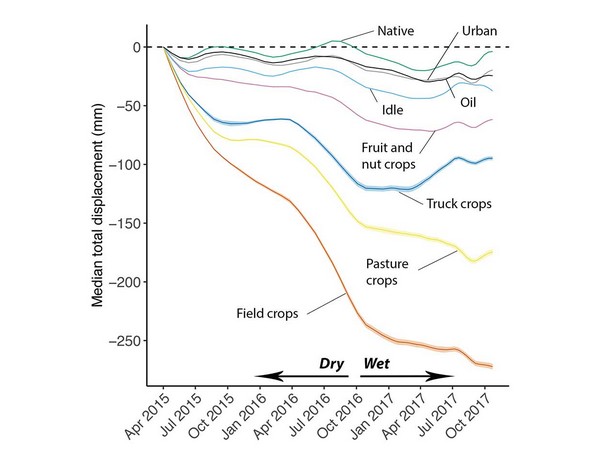 Because displacement is a response to groundwater storage change in locations with varying geology, soils and vegetation, the interpretation of InSAR varies across locations, unlike satellite measurements of climate that have the same interpretation in any location. Therefore, InSAR must be combined with other sources of geophysical data to achieve location-specific insight into groundwater use.