The harvest of sweet onions of the Cévennes was good and the marketing season got off to a great start. However, the optimism was cut short on the 19th of September, a date that will remain in the memory of producers for a long time. Raging water fell over their territory, in the high Hérault valley after an utterly unprecedented amount of rainfall: nearly 710 mm in 6 hours in Valleraugue! 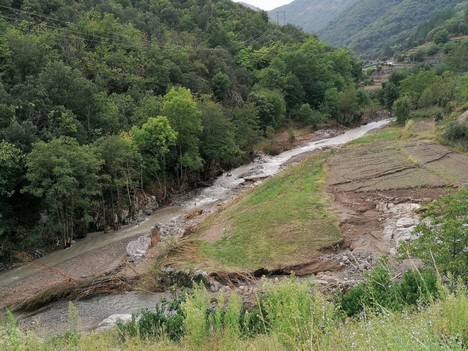 The first thoughts of the producers are with the grieving families and the hundreds of victims. The scale of the disaster is such that the outcome is far from definitive. The time is now to clean up and we already know that reconstruction will take a long time. The roads are heavily damaged and some villages are still inaccessible. The entire territory of the PDO sweet onion of the Cévennes has been affected. At least half the producers of sweet onions of the Cévennes may be affected.

The 2020 harvest was already stored and safe, but the terrace plots (faïsses) have suffered greatly. Many dry stone walls did not resist and the arable soil was washed away. The irrigation systems need to be rebuilt. The Taleyrac valley and the area around Mandagout and Valleraugue, which represent most of the production of sweet onion of the Cévennes, paid the heaviest price. Some producers lost more than a third of their production areas.

The apple orchards also suffered a lot, as they are often located at the bottom of the valley, where soils are deeper. The harvest was far from being completed. But in some places, trees were even uprooted...

On the site of the cooperative, the facilities were spared. The packaging and shipping activity could resume quickly, as soon as electricity and internet were back up. However, the activity has had to adapt to the supply difficulties because deliveries from the producers are delayed by the hampered traffic and difficult access to the farms. The direct sales store was able to reopen on Monday morning.

Overall, the marketing season will be able to resume rather quickly. But the future will have to be rebuilt. Here, the land is valuable. The 52 ha of sweet onions of the Cévennes harvested this year represent no less than 2,000 terrace plots that have been maintained by several generations.

Many plots were destroyed in just a few hours and it will take a long time to bring them back into cultivation, if it is even a possibility. But reclaiming the land is among the priorities to save the economic model of the cooperative, which is indispensable to the region. The studies already carried out for several years to identify and bring the plots back into cultivation will help regain the production potential as quickly as possible. Time is of the essence because the first sowing will take place next March and transplanting in May. Solidarity and political will will be essential to accompany the producers in a both urgent and long-term reconstruction.