The Belgian chicory market had a customary quiet summer. Prices dropped as usual. But, since last week, this market's picked up again. "The weather's turned, so, demand and prices are rising," says Primalof's new manager, Charles Cattoir. "We need the relatively calm summers. Our workers need a break, and we have to service our machines. We were very busy in the spring; we needed the rest." 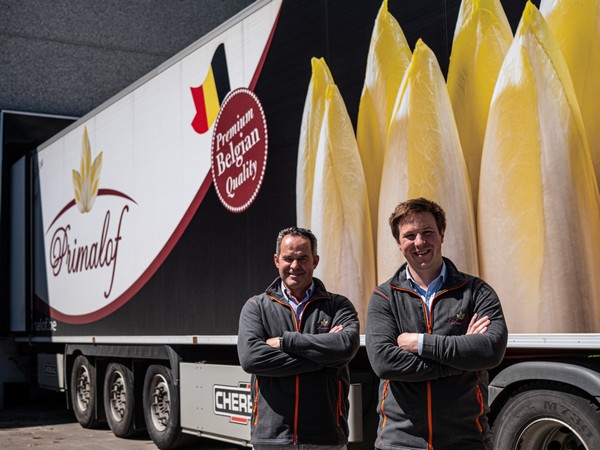 "We're currently still working with old chicory stalks, We're expecting the new ones later this year. They haven't grown quite enough yet. The past few days' rains came as if called. We're, therefore, hoping the new stalks will grow a little more. They'll be grubbed up later, so a shortage is slowly developing. We purchased additional stalks early in the year already. That now seems to have been a good choice. We can keep going until the new stalks are ready."

Charles took Primalof over from Yves D'Hauwers in May. Since then, their roles have been well-divided. "Yves is the master cultivator. He has more time now. He can control the farming, inspect the lots, and monitor everything better. It's a very positive evolution," says Carles. "I busy myself with other tasks. These include the commercial side of things. Yves advises me too. We each know what our responsibilities are, and it works great. The corona crisis hasn't interfered much at all. The acquisition's administration took a bit longer. But, it all worked out in the end."

"If we reflect on the previous season, we can be very optimistic. In the spring, the sector earned good prices. That boosted confidence. Companies are investing in new machines and technology again. The chicory market is a fairly traditional industry. It's great to see that the sector wants to develop. Development improves quality, and the entire sector can benefit from that," concludes Charles.