"Such drastic price drops have no rational explanation"

Not all areas in Poland had to deal with the difficult spring weather this season. For one exporter, hardly any damages were found. The sudden massive price drop for industrial apples was a surprise, given the fact there are less volumes available in Europe.

For Anna Litwin, owner of Polish fruit trader BlueHaskap, the apple season is currently in full swing. “In my region we haven’t experienced as unfavorable weather in the spring as other parts of Poland or Europe in general, so we are satisfied with the quantity and quality of apples in our orchards. The harvest of summer apples began much earlier than usual, about ten to fourteen days earlier, which I think is due to progressive climate change. However, the harvest dates of later varieties have already matched those of previous years. At this time, we’ve finished the gala harvest and are in the middle of harvesting champion, ligol and golden delicious varieties.” 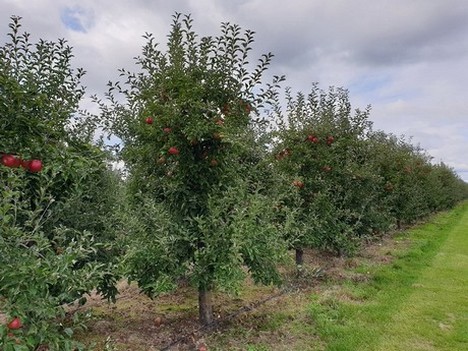 Litwin was surprised last week when prices for apples started dropping, despite the low amount of available apples in Europe: “Prices of industrial apples in Poland were satisfactory until last week, but for unknown reasons they started falling last week, by around 40 per cent. In just a few days, such a big drop! Conspiracy theories could be created as to why this happened, but the undeniable fact is that Europe has a much smaller number of apples this season. This is why, in my opinion, such drastic price drops have no rational explanation. In our case, we always have two or three diversifications. We have conventional industrial and first quality apples and organic orchards. In ecology, prices are higher and since we hardly had any losses from the spring weather, we expect a good season regardless.”

Although most of Litwin’s apples are destined for export, she loves the fact domestic demand among Polish consumers is growing. “Most of our apples, both industrial and dessert, are exported. I don't see any increased or decreased quantity or interest from foreign customers. However, I see an increased interest in consuming apples domestically. I’m very happy about it, because we are such a large country that we should consume most of our production ourselves. I think it is going in the right direction. The only goal to be achieved is satisfactory prices for producers.”

“For several years we have been struggling with the unpredictability of the weather, the lack of legal regulations and the strange movements of large processing companies, which is why we are trying to diversify our producers' crops and the possibilities of selling fruit. We try to work with respect for Mother Earth, not only in ecological production but also in conventional fruit cultivation. Additionally, apart from production, we try to influence processing. We process some of our collections ourselves or in cooperation. It is still a small part of our production, but growing. In addition, we focus our efforts on making consumers aware that only a healthy and balanced diet is a guarantee of good health and well-being.” Litwin concludes.