Peruvian ginger: there's more to it than food miles

FreshPlaza received comment on the article "Sicilian ginger will soon be headed for European markets", from Peruvian company OrganicSur, who say they felt compelled to go deeper into this topic, hoping to provide readers with some useful insights.

"We are witnessing several attempts to cultivate ginger at all latitudes, also in Italy. Our company has been importing fruit and vegetables from around the world since 1997 and don't think this should be seen as something wrong, as stated in the mentioned article."

According to OrganicSur the concept of food miles is being grossly overemphasized - "It is as if it has come to constitute an absolute value that supersedes everything else. As such, it is being leveraged in the evaluation of agricultural products to determine everything from their genuineness to their environmental benefits and above all, consumer health. We fear that, currently, this idea has been reduced to a mere geographical connotation, no longer representative of just a tool to fulfil consumer expectations".

"However, let's return to the article and the words with which it begins. We greatly appreciate that one can be "'intrigued by the benefits for human health that taking ginger brings ...'

"We are pleased with the idea that, even in Europe, awareness of the beneficial properties of this millenary root (ginger) is growing. At the same time, however, we are disconcerted to see how, even today, not only is a form of forced and impactful agriculture continuing to be promoted, but that they also want to induce the consumer to believe that the agricultural drawbacks apply only to distant productions and never to local ones. We believe we can assert this because of our intimate knowledge of the sector, having been pioneers since 2014 of a project extended to more than 200 hectares for the cultivation and import of organic, biodynamic and Fairtrade ginger, with weekly arrivals of fresh products on our tables. We bring to Europe a product coming from uncontaminated areas located in the heart of Peru, where the Andes meet the Amazonian tropical climate, also creating an important economic benefit for native communities".

In the article the Sicilian producer said: 'an Italian ginger, therefore [would be] much more sustainable with regards to the environment' "Without mentioning the organoleptic properties that are unquestionably superior. The peremptory nature of these opinions seems to be inspired by marketing needs of a 'protectionist and chauvinistic' approach, asserting that the Italian equation is equivalent to better production".

"However it would be appropriate to consider what is the real carbon footprint balance of a very basic agriculture such as the one carried out in an ideal climate and soil condition, such as those located in the Central Peruvian Forest. Thanks to altitudes ranging from 800 to 1200 meters above sea level and with slopes of about 10%, ginger grown in Peru finds optimal conditions. These particular pedoclimatic conditions make it possible to be developed without artificial irrigation, preventing, moreover, the formation of dangerous water stagnations which then require the use of the synthetic products necessary to counteract the numerous plant diseases affecting the lowland ginger or grown in greenhouses. In this way, the Peruvian rhizomes benefit from land conditions that allow them to complete the entire crop cycle of at least 9 months, unlike that which takes place in Italy where, it is necessarily reduced to 5 or 6 months due to the Italian climate where also at low latitudes it suffers from the winter break".

"In consideration of the agronomic forcing that must necessarily be used for cultivation in an unsuitable environment, we also have serious doubts that the Italian ginger obtained can be 'organoleptically' - and above all show a superior 'nutraceutical' behavior, as reported in this article. To simply confirm the validity of our doubts, it would be enough to check which are the favored origins of the chefs in selecting ginger for their creations". 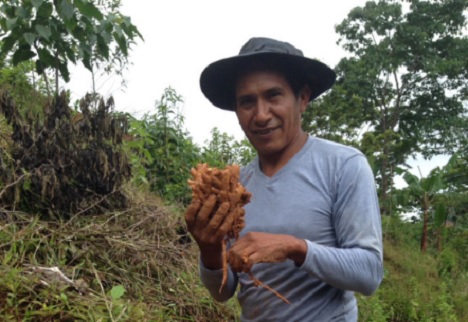 Gabriel Caja Julcarima, one of the small Peruvian producers who has dedicated body and soul to their land. Farmers that are synonymous of quality and attention to production, who have been producing organic ginger for the Italian market for more than five years.

"Finally, we can assert that these Peruvian ginger and turmeric crops have a high significance in guaranteeing the sustainability of many families who otherwise, in those conditions, would not find other sources of agricultural income capable of covering their survival as single-income farmer families. From this point of view, we can guarantee that continuing to rely on these "campesinos", in addition to offering us safe values of an ethical nature, offer us the awareness that, on the other side of the world, we could count on farmers who produce well and cleanly".