The Almeria-based company BioCampojoyma has just expanded its organic range with organic broccoli, which is produced by the Murcian cooperative Medifruver, which has a long history that has turned it one of the best producers in Spain. 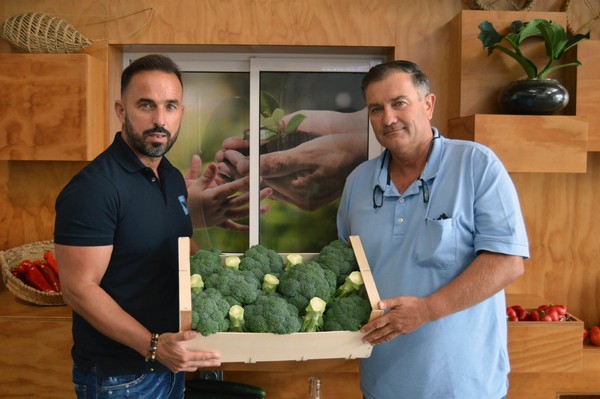 In this next and first campaign, four million pieces of broccoli will be exported between October 2020 and May 2021. The main destinations will be Germany, France, Poland, Romania, the Czech Republic, Sweden, Denmark, Austria and Switzerland, where the Almeria-based company already has an excellent position in the organic vegetable segment.

The agreement establishes that Campojoyma will be in charge of the marketing of this leafy vegetable and Medifruver of the production. The Murcian cooperative will thus adopt the technical system and sustainable production philosophy of Campojoyma.

This week, the founder and manager of Campojoyma, Francisco Jesús Montoya Sánchez, received a visit from the president of the Medifruver cooperative, Félix Garre Sanz, to formalize the agreement and show him around Campojoyma's facilities. Francisco Montoya says that "we have decided to include broccoli in our range, since we see it as an essential product in the organic sector, in the same line as organic Chinese cabbage, a product with which we are global leaders in terms of production. It should also be noted that Medifruver has already been growing broccolis for 30 years. Their decision to start growing organic was made ten years ago, which has given us trust to formalize this agreement."

According to Francisco Jesús, the alliance has been made thinking ahead into the future. "We expect to grow by 30% annually over the next five or six years."

Expansion of the leafy vegetable range
Organic broccoli is a very healthy vegetable, with a high content of vitamin C. It also has vitamins K, B and A, and minerals such as magnesium, iron, zinc, potassium, phosphorus and fiber. Including it in your diet ensures an iron intake against anaemia, protects the heart, purifies the body, strengthens the bones, takes care of the eyes and improves the skin.

The firm, with headquarters in Campohermoso, Níjar, has evolved exponentially since Francisco Montoya founded it in 2004, and currently has more than 30 organic fruits and vegetables in its range, which allows it to produce 360 days a year while always adhering to the guidelines of a traditional organic farming model.