The Melannurca Campana IGP campaign is about to start

The harvest and the reddening process of the Melannurca Campana IGP began about two weeks ago at the Aop Luce company. Starting next week the first Melannurcas will be available for marketing, despite the recent rains slowing down the colouring phase and thus making the whole process much longer. 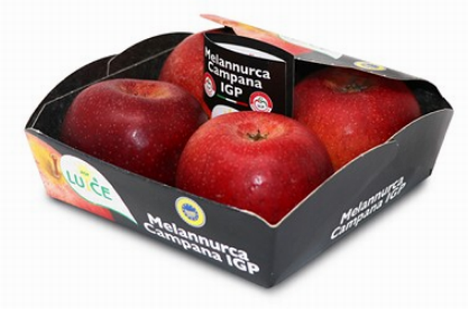 "We expected a very abundant production for this campaign after the 2019 one, which was a year of productive discharge". So stated Giacomo Galdiero, CEO of Aop Luce. "In the initial phase the plants showed plenty of buds; but the temperature changes recorded between April and June, which also affected our stone fruit campaign, negatively influenced the apple fruit set stages, causing some fruit to drop in June".

"If on the one hand this represented a decisive natural thinning, on the other it drastically reduced the expected production quantities, leveling them to those of the previous year (which was, as mentioned, one of a productive discharge), if not even below. In fact, 2019 was marked by quantities available that were more than 30% lower than the average". Giacomo Galdiero expects a campaign characterised by the product quality: "Precisely because of the fruit drops in June, the apples are of medium-large size and of high quality (unlike 2019, in which the plants had produced mostly small fruits). Prices will have to be adjusted to the situation, that is to the limited supply, and will resemble those of the last campaign".

The reddening process is a crucial phase in each harvest and requires careful work. The apples, gathered while still green, are placed inside a "melaio", on a bed of straw, where they must mature for at least ten days. They are then turned by hand, to ensure a uniform color and to favor the acquisition of the typical deep red color. For the last apples to be harvested, the process will end towards the end of October. 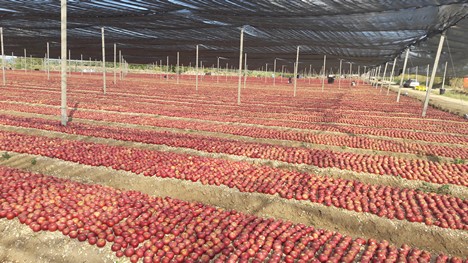 Melannurca is undoubtedly one of Campania's fruit and vegetable products of excellence; but it still represents a niche in the production of Italian apples, with an estimated total quantity of 40,000 tons, of which only about 25% is certified as IGP-Indicazione Geografica Protetta.