At this point in time, parts of Maine’s York and Cumberland counties are experiencing extreme drought conditions after months of unusually warm and dry weather. The drought is threatening fall crops and causing record-low river levels and scattered reports of dry wells. Also, the drought is fueling concerns about groundwater supplies dropping through the winter.

Most of Maine is in “severe” drought, though there are “extreme” drought conditions in more than half of York County and a small section of coastal Cumberland County, including Portland, according to the latest weekly report by the national drought monitor maintained by the University of Nebraska. 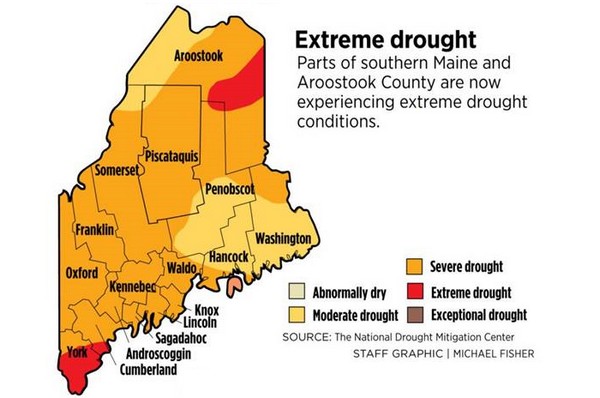 At Dole’s Orchard in Limington, owner Earl Bunting spent $9,000 in July to install an irrigation system with 20,000 feet of tubing to water 7 acres of apple trees. He’s been pumping 240 gallons per minute for an average of 6 hours a day from a 25-acre natural pond and surrounding bog.

Bunting said he only had two significant rainfalls at his pick-your-own orchard this year: 2.5 inches in July and another 1.25 inches from a tropical storm. When he bought apples from a nearby orchard to sell in his store, they were so small Bunting used them in cider instead.

Pressherald.com quoted Robert Lent, co-chair of the state’s Drought Task Force, as saying that the biggest impact of the drought is on agricultural crops, including blueberries, potatoes, hay and apples.