US Presidential election 2020: What will each candidate do for agriculture?

United Fresh Washington Conference runs this week, from September 21st through the 25th, and is hosted virtually on the United Fresh Live! 365 platform. On Wednesday, September 23rd, the conference boasted a general session in which representatives from both sides discussed what the future of fresh produce will look like for each presidential candidate. Ray Starling spoke for the republican side, and Tom Vilsack spoke for the democratic side. 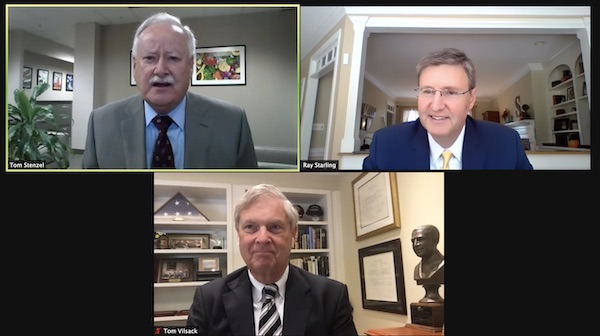 Ray Starling: “People are policy”
Ray Starling began his career with the Future Farmers of America as one of the national officers for North Carolina and served as a special advisor to President Trump on agricultural policy, as well as serving as the Chief of Staff to Secretary Perdue for the USDA. Starling says: “When analyzing the question of who should be the next president, I think of two aspects that are important to analyze: people and ideas.”

Starting off, he discussed the different people who were a part of the Trump administration in the past four years, and how they have positively impacted the agriculture industry. “I always say that people are policy. Choosing the right people for the right positions helps to get things done. The executive branch is currently made up of a mass of individuals who are accessible, empathetic, and knowledgeable about agriculture. Secretary Perdue is a great example: his work ethic, heart for agriculture, and penchant for common sense are something I am personally familiar with, and he is tough, sharp, relentless and tireless – all qualities that epitomize the American farmer and agricultural businessmen in our country.  Additionally, the people who make up his cabinet are mostly from state agricultural departments and are people with real experience in the industry, who know what happens in the fields. I believe that people are policy, and the people who are at our backs in the current administration are unbeatable,” Starling says.

Trade deals and USDA programs
In addition to the importance of having the right people in the right positions, the ideas that are brought forth by an administration are also very important. “We need more ideas, less ideology,” Starling says. “The trade agreements made by President Trump have been very important and impactful for the agricultural industry: USMCA, the US-Japan trade agreement, and of course the trade agreement made with China, have all been massive wins for the agricultural industry. The role of the USDA in procuring food for those who can’t afford it is also an important idea to come out of this administration. This was an idea that had already been introduced back in 2017 through a Harvest Box Program and wasn’t received well at the time – but now there’s been a $3 billion investment in the Farmers to Families Food Box program, which shows the tremendous success of this idea.”

“Finally, the issue of labor costs is a very important one, and we all need to get involved in this. President trump has signaled that he is more than ready for that conversation,” Starling concludes.

Tom Vilsack: Biden seeks to strengthen the supply chain
Tom Vilsack has served as the United States Secretary of Agriculture, as well as serving two terms as governor of Iowa. He is currently serving as the President and CEO of the Dairy Export Council. “Vice President Biden is from Delaware, which is an agricultural state, and he has a thorough understanding of the importance of agriculture in our country,” Vilsack begins. “Biden’s focus will not just be on rebuilding after the pandemic, but on building back better. This means creating a more resilient supply chain, to rebuild and restore the supply chain in a meaningful way that allows us to be able to pivot more effectively in case of future crises.”

One very important aspect of building back better is infrastructure, which Biden plans to improve. “Infrastructure is very important to American farmers as it allows them to get their product to the market more quickly, efficiently, and effectively. Improving the country’s infrastructure helps farmers be more competitive and will help to expand the markets – which is another goal for Biden. There will be opportunities for expanding the market by providing more access to fresh produce for all families and children in America, with incentives for hospitals and schools to buy more fresh produce,” Vilsack shares.

The Biden Deal
Rather than a Green Deal, Biden has a Biden Deal, which focuses on mitigating the next disruption that could occur from climate change. “What would the Biden administration do? Look for more opportunities to create new income for farmers, by investing in conversion practices to increase soil health and water usage, to run the farms more efficiently and productively. There will also be a focus on the role of farmers in storing and sequestering carbon, and they should be paid for that. This will create a revenue stream for farms that will remain steady when there is a new disruption to the supply chain.”

“Biden’s goal is to create a less divided nation. There is no problem or situation too difficult for America to tackle, as long as we’re united,” Vilsack concludes.

The United Fresh Washington Conference will run through September 25th. Click here to register to attend the final days of the conference.