8,596 bananas from Guadeloupe & Martinique offered to the Food Banks

During stage 14 of the Tour de France, on Saturday the 12th of September, French bananas, the official banana and unique agricultural product of the Tour, organized an action of charity and solidarity for the Food Banks.

Reminder of the concept
On Saturday, September 12th (stage 14 Clermont Ferrand-Lyon), the runners crossed the municipality of Châtelneuf (343 inhabitants) located 97km from Clermont Ferrand and 97km from Lyon. For the French banana sector, Châtelneuf represented the opportunity to give a nod to its departments of origin: Guadeloupe (971) and Martinique (972).

Role of the runners
Each runner who passed km 97 of Châtelneuf instantly activated a donation of 1 kilo of French bananas to the Food Banks. Kevin Reza of the B&B Vital Concept Hotels, the only overseas runner, also participated in the action by offering his own weight in bananas.

Role of internet users
Internet users were able to follow and take part in this solidarity action via the facebook live feed of Banana of Guadeloupe & Martinique. 1 view = 1 banana offered to the Food Banks. In total, 8,596 bananas were offered to the Food Banks. “We are delighted with the outcome. It was very important for us to focus the participation of the French banana in the Tour de France this year on solidarity and lightness, given the difficult times linked to the Covid crisis,” explains Pierre Monteux, general manager of the UGPBAN Fruidor group.

This event also helped promote the historical partnership between the Bananas of Guadeloupe & Martinique and the Food Banks.

“This original action of solidarity is further proof of the loyal support from the French banana sector to the Food Banks, in France and overseas. Thank you!” added Laurence Champier, federal director of the French federation of Food Banks. 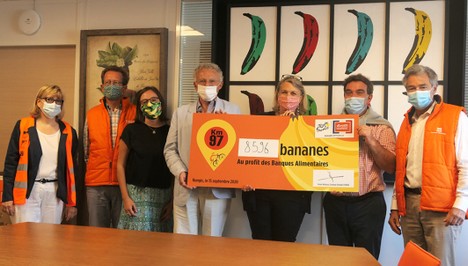 The Banana of Guadeloupe & Martinique
As the only French banana grown on family farms in Guadeloupe and Martinique by 600 independent producers, after 20 years of good agricultural practices (crop rotation, fallowing, biological control…), the banana plantations of UGPBAN Fruidor are now a refuge for many species. We count up to 200 earthworms per m², more than 200 species of insects (Cihence study 2015). Natural predators now control the banana pests and protect the crops. As the leading private employer in the French Antilles, the banana sector represents 10,000 direct and indirect jobs. 90% of the employees of the company work on permanent contracts. “The French banana defends our social model in the face of international competition.”