Canadians are increasingly interested in pineapples coming from new countries of origin, including Colombia and Ecuador.

“Our supplies are steady right now. We’ve probably tripled our volume over last year,” says Vaughn Smith of Global Citrus Group in Brantford, ON. He notes that Global Citrus has been bringing in pineapples from Colombia for approximately 18 months now into its Western Canadian facility. “Last year we were doing a container every third week and most of that was due to delays of the port and Canadian customs not being aware of product originating from that area. They would consistently pull exams on it. It has become a lot better as they’re getting used to the grower and the region and product arriving from there.”

He says now product comes out of the port generally within three to five days. “We’re still regularly getting examined but they’re not the intensive exams where customs officials would fly out from Ottawa. That added significant delays and costs when we first started,” adds Smith. 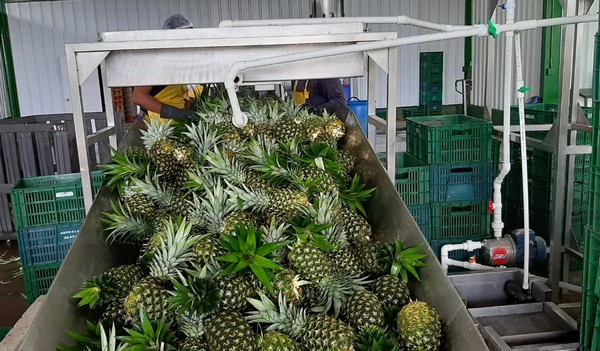 Ecuador shipping too
For now, Global Citrus sends Colombian pineapples to Western Canadian retail and foodservice clients. “The pineapple from Colombia has a bit of a higher BRIX and a different flavor compared to the product out of Costa Rica. Most retailers carry Costa Rican product but there’s also product from Ecuador that we’ve been trialing now too. It’s new to the Canadian marketplace,” he says. “Demand has been growing. It’s always interesting getting someone interested in a new label and pineapple is one of those things that, especially out west, that is more label conscious. Anyone that has trialed it has come back for more.”

He adds as well that once program business has been established for the product, the company is looking to start trials to Eastern Canada as well.

As for pricing, Smith notes it’s extremely stable. “The pricing is generally a bit lower than Costa Rican product. It’s come off slightly from last year—about 10 percent less in overall costs, primarily due to the pandemic,” he says.