The trade balance is positive too

Fruitimprese announces an increase in exports in the first half of 2020 (+7.6%)

remains in line with the trend of the first quarter, with growth in value (+7.6% nearly 163 million more) while volumes dropped by 6%. The value of exports exceeds 2.3 billion euro. Fruitimprese announced this on the basis of data from ISTAT.

Within the semester characterized by the pandemic lockdown, we can observe that there were no negative consequences on exports which, instead, increased the turnover by 7.6%, up to 2.3 billion for a quantity of 1.6 million tons.

With regard to imports, Italy purchased about 2 million tons of fruit and vegetables from abroad for a value of over 2.2 billion euro. In terms of value, citrus fruit imports increased strongly (65.6%), fresh fruit also grew (10.4%), leguminous vegetables decreased (-14.2%). In terms of volume, citrus fruit (31.3%), dried fruit (7.4%) and tropical fruit (7.2%) recorded an increase.

Marco Salvi (in the photo on the right), the national Preside 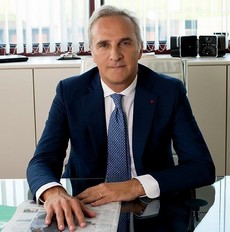 nt of Fruitimprese, commented on the data and pointed out "the capability of Italian companies to be major players on international markets, despite the dramatic drop in production of the main seasonal products and the lack of logistics to supply foreign markets and to ensure supplies in our country encountered during the lockdown phase."

"We play a fundamental role in our economy - added Salvi - which is unfortunately not acknowledged by politicians. We must stress that the damage caused by the non-inclusion of the fruit and vegetable sector among those benefiting from the tax deduction provided for in the Relaunch Decree, was followed by the mockery of a tax credit for the costs of sanitation and the purchase of protective equipment, which has gone from 60% announced by President Conte to 9% of expenses".

" Basically - concluded Salvi - the entrepreneurs who operate in the fruit and vegetable sector and who keep on doing their best to guarantee the supply of fresh produce to the Italians, with huge costs for the sanitization and security of their workers, and who are taking on the health and economic risk, will benefit only insignificantly from the aid."