Blueberry decline caused by Lasiodiplodia theobromae in the Czech Republic

The popularity of blueberries (Vaccinium corymbosum) has been rising worldwide, due to their nutritional bioactive compounds such as flavonoids, anthocyanins and polyphenols. These factors enhance the demand for fresh blueberries in the Czech market, which resulted in an increase of blueberry plantations in the Czech Republic.

In spring 2018, about 200,000 1-year-old blueberry plants originally from the Netherlands were planted on 47 ha in the South Moravian region. In September 2019, wilting of leaves and shoots, bark necrosis and dieback of the plant were observed. The occurrence of blueberry decline symptoms in the field was near 2% of the 5,000 observed plants which resulted in significant yield losses at the beginning of the production. 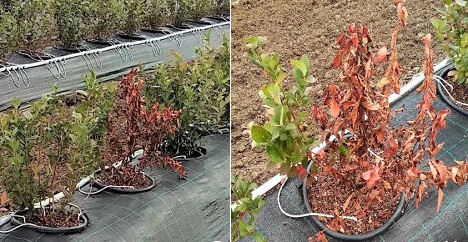 Scientists at Mendel University in Brno (Lednice, Czech Republic) have collected twenty shoots of symptomatic plants (one shoot from each plant, twenty plants in total). Nine isolates of Botryosphaeriaceae-like fungi were obtained from these twenty plants. Morphological and molecular analyses and pathogenicity tests confirmed that the causal agent was Lasiodiplodia theobromae.

"Blueberry decline caused by Botryosphaeriaceae spp. has already been described around the world, but to our knowledge, this is the first report of L. theobromae on blueberry in the Czech Republic," the scientists concluded.