The OrganoGroup’s organic peach and nectarine harvest kicks off in a week to ten days, after a cold winter on top of the Waterberg Mountains, close to Mookgophong, Limpopo, resulting in strong flowering. Their high-altitude microclimate is cooler and more temperate than the surrounding Bushveld, better known for wildlife and cattle ranching. 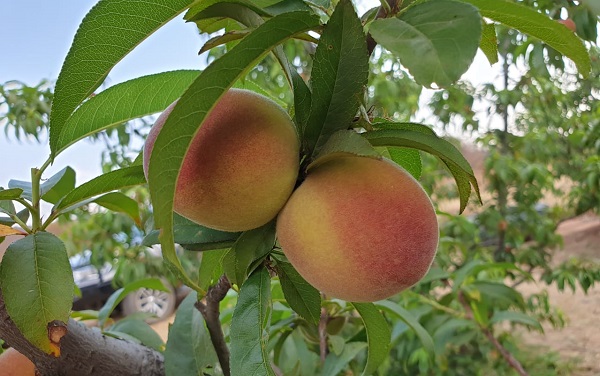 They have been certified organic fruit growers for sixteen years.

The early peach crop is marketed locally at Woolworths and other specialist clients, with exports (by sea) starting by mid to end October. OTC Organics has the sole mandate to market their organic stonefruit in Europe, much of it for Scandinavia, Germany and the Benelux countries. Organic nectacots is another line they export to Europe.

Their Canadian stonefruit programmes are hanging in the balance due to the limited availability and high expense of air freight this season, says Paul Roos Snr, director at the OrganoGroup and pioneer organic fruit farmer.

Every year they send small volumes of peaches and nectarines by air to the Middle East as well; at this stage that could go ahead.

Prioritisation of African apple exports
Organic apples follow on peaches and nectarines, about 1,500 to 2,000 tonnes, among the very first apples of the domestic season and therefore local retail supply is a priority. 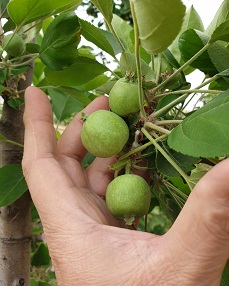 “At the moment we’re not planning any apple exports to Europe because there are high volumes of stocks, but that could change on short notice and then we could export. We’ve done that before, if we notice a shortage in Europe, so we’ll be keeping an eye on the spot market.”

Right: OrganoGroup's organic apples, due to be harvested in December

“We want to look at expanding exports to Africa this season, through large retail groups with an African footprint and through specialist African export agents. The plan is to prioritise African exports; our volumes are getting large. We’ve been planting apples for a long period and we have a large volume coming in. The growth of our trees has been slower than trees in a conventional orchard, it’s taking a bit longer to fill the space than in conventional production where trees can be pumped full of nitrogen.”

As with their stonefruit, they plant the locally-bred Afri range of apple cultivars. Paul Snr says they have found Afri Glo to the best for exports, while Afri Blush and Afri Star are also blush apples ripening at a very good time for them. 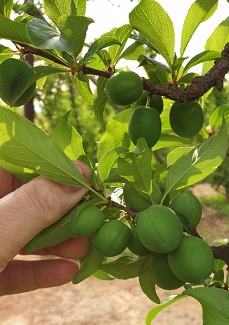 Right: the African Rose plum orchards are being thinned at the moment

The aim is to extend their plum season to achieve an economy of scale in their logistics and marketing costs, something that’s only really attainable in a long season (like their seven month-long organic sweet potato season).

“In a short season your overhead costs are much higher per unit. Everything becomes less expensive when you’re busy for a long season.”

They’re planting local cultivars African Rose, African Delight, Ruby Sun and Ruby Crunch as well as Fortune, even replanting late cultivars like Angeleno they’d taken out before when the focus was more on apples.

“Angeleno performs well for us but we took it out because it came too late in the season. Now we have the capacity to handle late fruit. Volume-driven exports are our goal.” 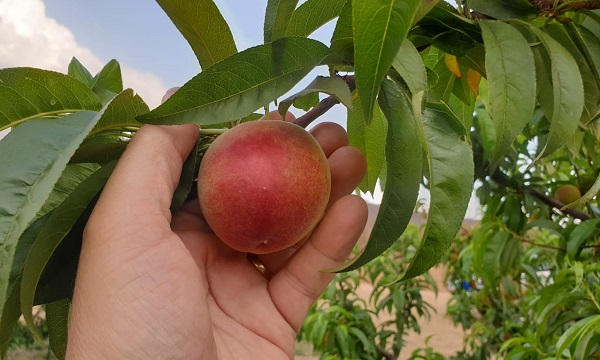 The peach harvest will shortly open their new stonefruit season

It’s possible to get substantial volumes on plums, he explains, with the added advantage that they are less sensitive to bruising than peaches and nectarines. 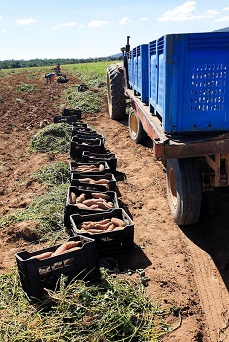 Organic vegetables have increasingly become a mainstay in their portfolio, predominantly marketed in Europe by OTC Organics.

The export season on organic sweet potatoes run from February through to August, much of it for retail. This season they’re planning to export over 70 containers of sweet potato and over thirty containers of Kuri squash, so there is significant expansion in the bulk vegetable export lines.

“We are growing our sweet potato line at a fairly strong rate after coming in slowly, getting to know it, because it’s not that simple to produce a sweet potato organically. We’ve learned a lot over time and we’re at a point where we can move quite large volumes.”

“The OrganoGroup is starting to get traction in Europe and we’re receiving many inquiries from as far as Russia and elsewhere. Now and then we supply directly to a niche market but for Europe we usually refer enquiries to OTC Organics.”

Niche markets in the Middle and Far East could offer opportunities, not only on stonefruit but also on their bulk vegetable lines.