France: the fresh markets are not as low as they were at the start of the campaign 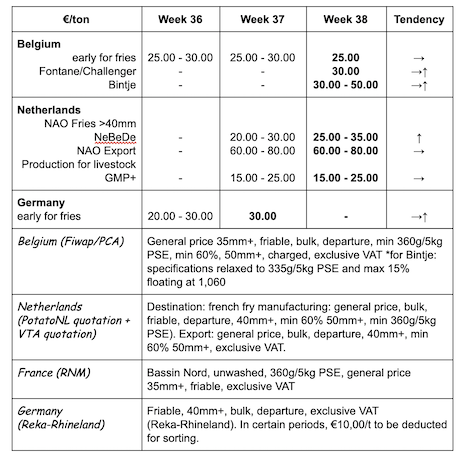 Early processed potatoes: the last volumes are being removed partly for the industry, and partly for livestock feed.

Storage varieties: very low demand from the industry besides the contract deliveries. Export is not very active, except for some small volumes to Africa (Senegal). The offer is very limited, due to the low prices, and because of the harvesting difficulties following the drought.

Bintje: 3.00 to 5.00 €/q depending on quality (caliber) and destination, sustained market. 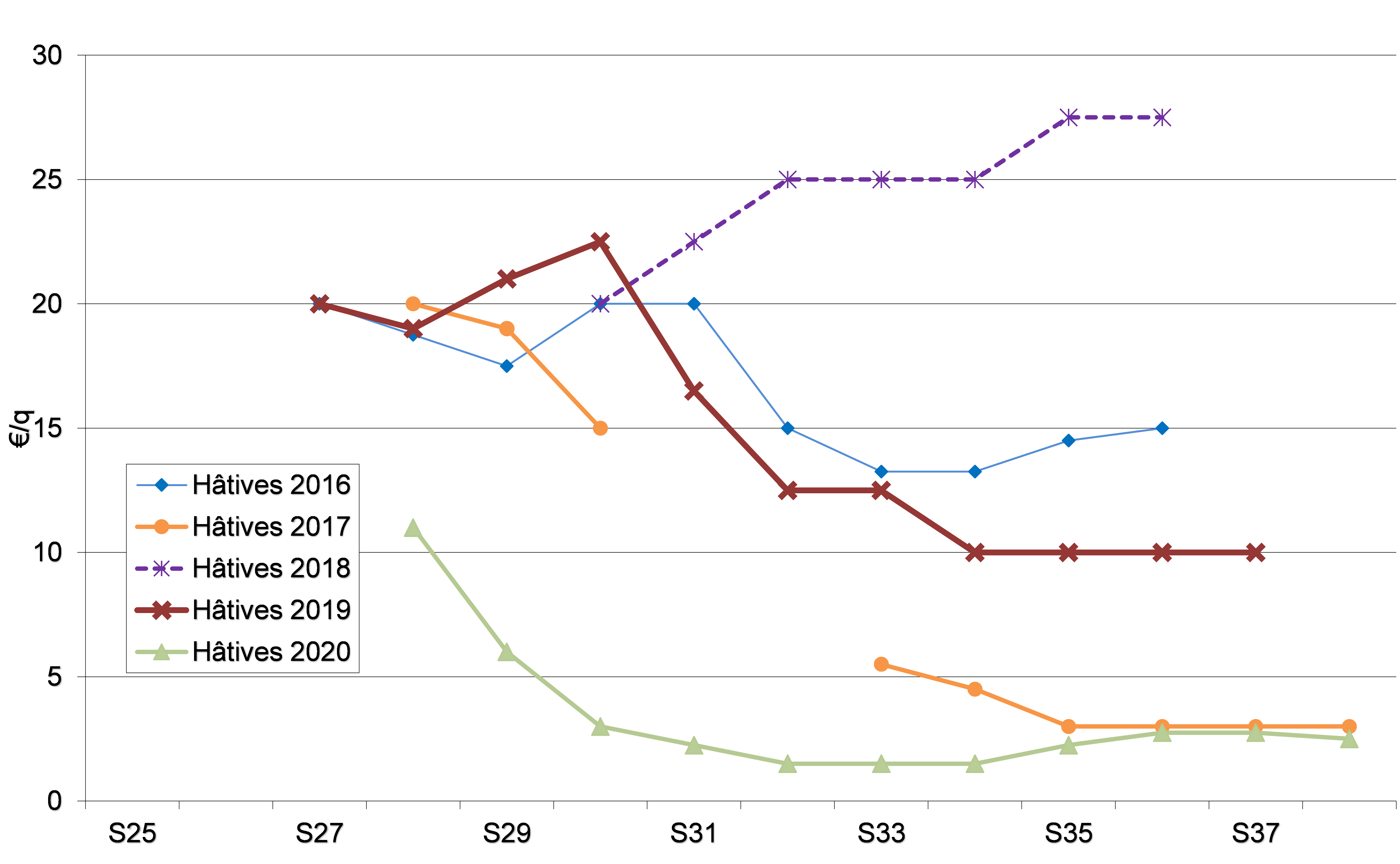 Netherlands
The harvest of early potatoes is coming to an end and the uprooting of storage varieties has begun in the sandy areas, regularly with watering/irrigation beforehand. The harvest conditions have deteriorated considerably, and some work in the fields had to be interrupted. Industrial buyers are hardly interested in the free volumes, which are redirected to alternative markets (livestock, starch, biogas). Many varieties for fries still need to be topkilled.

France
The industrial markets are making a new start with very average yields and difficult harvest conditions because of the persistent drought. The prices displayed by the factories for small volumes to complete the contracts vary between 2.50 and 3.00 €/q for early varieties, Fontane, Daisy and Shepody. The fresh markets are not as low as they were at the start of the campaign because the reality of the yields is making some operators more optimistic. Topkilling is only just beginning on a large scale in Flanders, and is more advanced in the Hauts-de-France. For the plots that have been cleared sufficiently, the dry weather makes it necessary to water before uprooting. This is the case in Picardy. When irrigating is not possible, producers worry about the high dry matter content. The yields are not at the expected level. In Beauce, the harvest is ending and 75% of it is completed in the Grand Est, with the help of irrigation in both cases. In Normandy, the work will be interrupted next week if it does not rain, and the yields are disappointing.

Yields barely within the multi-year average (sources: UNPT/CNIPT/Chamber of Agriculture). The samples in weeks 35 and 36 on 240 plots (all varieties and regions combined, with or without irrigation) show an average yield of 43.85 t/ha, similar to 2019. The progress in 2 weeks was only 3.5 t/ha, and the gap with the 5-year average has reversed (from +0.6 t/ha for the previous sample to -0.6 t/ha). The average yield varies considerably depending on the region. Irrigation brings an average of 9 t/ha compared to the dry plots.

Germany
Fresh market (early and semi-early): prices are down again, both for firm flesh: 11.67 €/q (12.25 €/q last week) and for soft/mealy flesh: 10.71 €/q (11.08 €/q last week. The harvest is in full swing, and the offer is still higher than the demand, hence the lower prices. Some early and semi-early still have not been sold and weigh slightly on the market...The sector hopes that prices will stabilize during the “Einkellerungsaktionen” (promotional action for the storage in cellars) at the end of September...

Organic potatoes: producer prices are clearly down: between 41.00 and 43.00 €/q (all varieties and markets combined). The organic harvest, mostly intended for the fresh market, is in full swing and the gross yields are rather good (in Bavaria) but average in the east. Many problems with molehills, common scab, rhizoctonia and sometimes over-sized potatoes. At the same time last year, prices were around 66 €/qt, and in 2018 around 56 €/qt. The many producers who had to irrigate estimate that these prices are not good. Following the good prices of the past 2 years, some organic producers have increased their sowing areas, and others converted to organic. In 2019, 10,100 ha were planted (+800 ha compared to 2018), including 8,800 ha for the fresh market (with early varieties). A trend in mass retail, which surfs on the “local and seasonal” trend, is to favor local productions for as long as possible. Storage in crates-fridges has a promising future, as well as the late and long-dormant varieties.

Great Britain
The ongoing uprooting is taking some pressure off on the different markets, but overall, prices have been difficult to maintain, except for some high-quality segments.

On the retail markets, there is a residual offer of early potatoes at 11.00 - 13.00 €/q, with the quality for fries going up to 16.50 €/q (Markies, Agria, Maris Piper). Same price range for the Fish and Chips shops. For the industry, the demand outside of contracts is negligible, and contract removals are rather late. In the fields, the harvests are progressing well in the south, but slowed down in the east where irrigation/watering beforehand has become inevitable. Some rejection due to blue spots and some contract deliveries for storage are reported. Damage from moles also seems higher than usual.