In some places, interest was too weak. In order to get these
the distributors lowered their receivables, but this did not drive the processing consistently. When supply and demand were in balance, valuations generally remained constant. Occasionally, there were also price increases, for example in Munich, where the prices of Greek Crimson Seedless rose. In Frankfurt, customers had to dig deeper into their pockets for complementary local products. 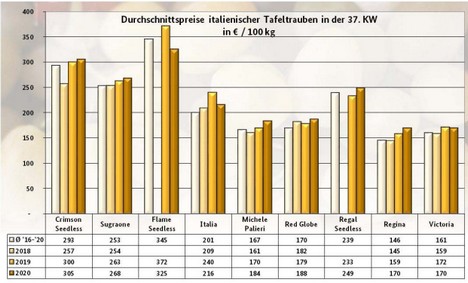 Apples
Local batches shaped events. Overall, the availability was a little too extensive. However, due to discounts, the turnovers accelerated.

Pears
Italy dominated with Santa Maria and Abate Fetel, Williams Christ added. The wide range of products was enough to satisfy the demand without any problems. In many cases it was even too rich, which forced the distributors to take advantage of discounts if they wanted to avoid stocks.

Peaches and nectarines
The end of the sales period came closer and closer: the inflows dried up here and there for days on end. Although the range of goods was sufficient to satisfy the demand, it was not particularly strong.

Plums
Native Hauszwetschge, Presenta, Top and Fellenberg dominated events, together with Serbian Stanley. Demand was disappointing now and then and the traders were therefore forced to adjust their prices downwards.

Bananas
Well-dosed inflows from the ripening plants, focused to the sales possibilities, resulted in a balanced ratio of the supply to the rather underwhelming demand.

Lettuce
German batches of iceberg lettuce were the most popular, Dutch batches followed in terms of importance. The quality had improved and prices went up as a result.

Cucumbers
Local, Dutch and Belgian shipments formed the basis of the assortment. The supply dropped off noticeably. The excellent demand could not always be satisfied.

Tomatoes
Prices went up. On the one hand, this was due to higher purchase demands, on the other hand, the distributors had stored fruit from the previous week that was not in good condition and were still able to increase their fresh produce prices.

Sweet peppers
The previously predominantly Dutch deliveries dropped off noticeably. On the other hand, cheaper Polish shipments came in. Although the Spanish season has started, these goods hardly generated any demand.