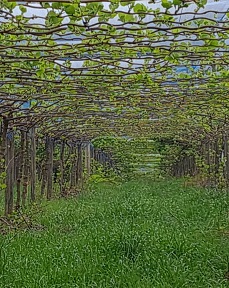 South African kiwi arrivals are improving every year as a result not only of tweaking shipping protocols but also through lots of little things done on the farm and in the packhouse, like transporting the fruit after picking in cold trucks or pre-cooling fruit before packing.

“Every year we learn a little bit more and this means there is good confidence when the fruit arrives, that it has good shelf life, good flavour. For example, with Soreli last year we had virtually zero arrival issues,” says Peter Turner, director at Variety Innovations B.V. and SA Kiwi Pollen.

All around the country, farmers in South Africa are looking for a dollar-based, export-oriented leg to their farming operations and often, apart from the usual suspects like blueberries or macadamias, they consider kiwi production. Sometimes they are in areas which experience frost in winter, mistaking that for the chilling accumulation needed by kiwi orchards. 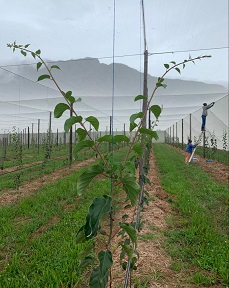 “In Waboomskraal (pictured right) and Grabouw [in the Southern Cape] the days remain cloudy in the winter, so that although it’s not spectacularly cold at night, the winter daytime temperatures rarely exceed 12 to 16°C."

"In Waboomskraal and Grabouw we’re seeing that the fruit quality and the fruit size are exceptional. There are certainly areas in South Africa that are “sweet spots” where we could see the industry expand considerably, with a very high quality of product.”

“In Waboomskraal we’re closing in on between 35 and 40 hectares, and in Grabouw probably not more than 15 hectares. The potential is starting to show itself and the industry is gravitating towards these areas.”

The potential of this area for kiwis was explored in the 1980s with a Hayward-focused kiwi boom in which some of the large apple producers “burnt their fingers“ and there is still a residual resistance to kiwi fruit production, particularly in Grabouw.

Improved pollinator varieties & management practices
Back then, Peter says, these areas were ground zero of kiwi planting but low tonnages were a result of a mismatch in pollinators, creating their reputation of being difficult. The orchards needed a wider range of pollinators and its concomitant management and some of these old orchards are now reaching sustainable tonnages of Hayward crops and are in fact very competitive with apples.

All photos supplied by Peter Turner

“Three things have happened since kiwis were declared a failure in Grabouw: we now have a whole range of new varieties with lower chilling requirements, and we have the male plants to guarantee sychronicity and we better understand the management techniques.” 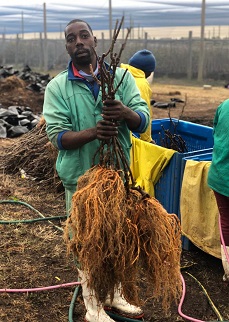 "We have also seen a dramatic improvement of the quality of nursery stock," he continues.

"Two dedicated nurseries in White River, Mpumalanga, and in Waboomskraal have devoted their attention to producing top quality kiwi plants. This has considerably improved performance in the field compared with issues in the past."

New growers must do their homework and seek to ensure that they have adequate chilling units and that they grow proven varieties with a track record of local evaluation and commercial production history.

Supply window before New Zealand will close in time
Much has been made of the gap that South African kiwis have before the start of New Zealand kiwis, and there is strong demand, but the New Zealand industry will close this window over time, Peter says.

The future is rather in cooperation with Northern Hemisphere grower-marketers who are striving towards a longer cycle of year-round supply and keen to engage with South African growers, like happens in other industries, but a partnership on even more intimate terms, with technical advice or packing into the brand.

Primland in France is such a company (last year it returned the best kiwi prices in South Africa, he notes) and Agricolibio in Italy. 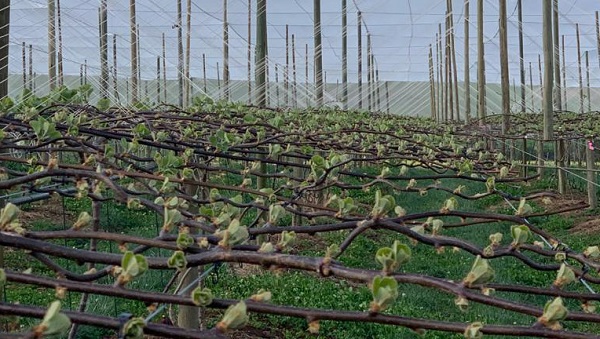 A Waboomskraal kiwi orchard, where plants are currently emerging from dormancy

Kiwi could offer climate change alternative to apples
There are kiwi growers in other provinces who have had varying levels of success, who have started looking for land in KwaZulu-Natal and the Southern Cape because they realise kiwi performs infinitely better in areas with adequate accumulation of winter chilling units.

Within the next five years there could be a significant conversion of apple orchards to kiwi orchards, as apple growers are starting to look for alternatives due to climate change; some of the newer kiwi varieties have lower chilling requirements than apples. As an aside, he notes that the ultimate loser in the Southern and Western Cape will probably be wine vineyards.

“Kiwis are still an “Orphan Annie industry” in the sense that it’s still tiny but it offers some very good diversification potential in future for farmers in areas suitable for pome and higher chill stone fruit.”