"Mango consumption in Spain could grow faster than that of avocados"

The mango campaign is already underway in Malaga, where the sector is working on the harvesting, handling and marketing amid growing concerns about the development of the COVID-19 pandemic, which could lead to a new lockdown. 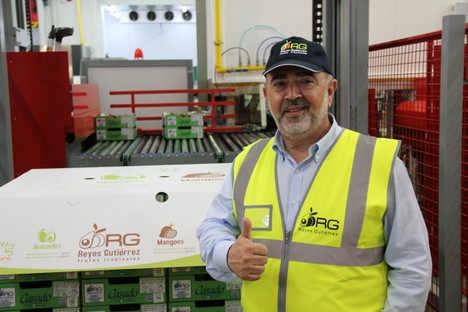 “Although there are companies that kicked off at the end of August, we started the mango harvest in week 36 to test our new robotized line for mango packaging, which also carries out the palletizing and depalletizing. As of this week, we will start having consistent volumes," says Juan Antonio Reyes Gutiérrez, manager of the Malaga-based company Reyes Gutiérrez, adding that "there is tension in the sector, as there are many new outbreaks in Malaga and we are dealing with the absenteeism of workers who, directly or indirectly, have been exposed to the virus. In our case, we have around 20 fewer workers than usual.”

The harvest promises to be similar to last year's in terms of volume, according to Juan Antonio Reyes. “We had expected a great harvest this season; an ON year, as we say in this sector, but the abundant rainfall in spring took a toll on the fruit setting of the Osteen variety. Also, the heat wave recorded in early August, when temperatures reached up to 51ºC in some of our production farms, caused the fall of abundant volumes of late Keitt mangoes, the company's most important variety. However, the entry into production of new plantations, as well as the greater productivity of plantations that are reaching their full maturity, entails that the total volume will be similar to that of last season. Although it is difficult to give an exact estimate, between 30,000 and 35,000 tons of mangoes are expected to be harvested in Spain.”

Reyes Gutiérrez sells mangoes and avocados from various origins all year round. “We have been working with mangoes from Senegal and then we've continued with imports from Brazil until this week. Since we started in March, we have been very satisfied with the off-season mango campaign, in which we have hardly had any quality problems."

"From now on, Spanish mangoes will take over, perfectly coexisting with Brazilian mangoes in the European markets. In Spain, which is our main destination, with around 55% of our sales, there is perhaps more competition from Brazil, where the spot market likes mangoes with a lot of external coloring, such as the Tommy and Palmer. In France, our second most important market, Brazil is not as widely present. The European market receives around 230 containers per week. Spanish mangoes will dominate the European supply in the next 6 weeks, a period in which Europe usually absorbs around 30,000 tons. Therefore, the origins wanting to compete with Spanish mangoes in Europe will have a difficult time."

Mango prices at origin have reached exorbitant levels, with 2.50 Euro per kilo paid at Malaga's auctions at the end of August. In the first week of September, they dropped to an average of between 1.50 and 2 Euro per kilo, and this week they have settled at around 1.40 Euro per kilo. "From week 38 to 42, a period in which more mangoes will be available, we expect prices to range between 6.50 and 7 Euro per box, which is very reasonable for both the producer and the distributor."

Mango acreage stabilizes, although the production continues to increase
Due to the characteristics of its climate, Malaga is the only area of ​​the Iberian Peninsula where extensive mango cultivation is possible.

“I believe that the production will continue to increase as the younger plantations reach their full maturity and their yields grow; however, the capacity for the acreage to expand is more limited, even within Malaga. In recent years, many people have been encouraged to cultivate the fruit due to the great yields it offers in this area, but the limited access to irrigation water won't allow for much more expansion. Nothing to do with the growth that avocados are achieving outside of Malaga. While the mango acreage grows by around 50 hectares per year, that of avocados could be doing so at a rate of between 1,500 and 2,000 hectares per year,” says Juan Antonio Reyes.

“Although other European countries, such as Portugal, consume around 4.5 kg per year per capita, Spain barely consumes between 500 and 600 gram per year per capita, compared to the approximately 1.2 kg of avocados that are consumed per person each year. Thus, in Spain, the potential for growth of mango consumption is greater than that of avocados. Almost everyone who tries mangoes likes them. It is a sweet and very versatile fruit, with a lot of fiber. But, there are many differences between the various countries that produce it when it comes to the ripening and varieties. Therefore, if we manage to offer better mango varieties and greater stability and consistency in the quality throughout the year (something that has been achieved with avocados), the fruit's consumption will skyrocket,” he says.

500 hectares of mango and 1,500 hectares of avocado by 2021
The company, which has a subsidiary in France (Reyes Gutiérrez France) and has recently acquired 100% of the juice and sauce processing company Avomix, is present in the main Spanish retail chains, as well as in other countries, mainly France and the United Kingdom. Its growth plans include a project to grow 200 hectares of avocados in Portugal and another 150 hectares in Cádiz. Thus, by 2021, the prospect is to already manage around 600 hectares of their own, covering a total of 1500 hectares if the production from its growers is taken into account. As for mangoes, the acreage is expected to reach 500 hectares.