As part of a protest to raise awareness about the situation of local farmers, Croatian MEP Ivan Vilibor Sincic dumped dozens of watermelons outside Government House in Zagreb. Recently, Croatian farmers complain that since the country joined the European Union local food producers have been undermined by cheap imported food.

Sincic and other protesters were outside the government building on September 10. The claimed the watermelons they threw down were meant to symbolise the watermelons and other fruit and vegetables farmers would have to plough under or destroy because they were unable to sell them. 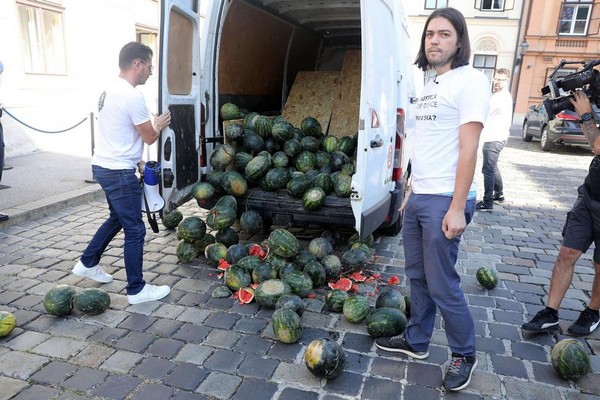 Sincic issued a statement, saying: “Every year, thousands of tons of domestic products fail in Croatian fields. Our struggle must be for our country, for our children, for our people. We import food, we import over 90% of salt [though we are] near the Adriatic Sea. They [politicians] do not hear the voice of farmers, they do not hear the voice of craftsmen. They only hear when they are shouted at.”

Croatian government officials were quick to criticise Sincic. Agriculture Minister Marija Vuckovic dismissed the protest as “theatre”. Deputy Prime Minister and Minister of the Interior Davor Bozinovic said that “no one expected that something resembling a security threat would come from a politician”.